Can't Wait for Love, Chai, and Other Four-Letter Words 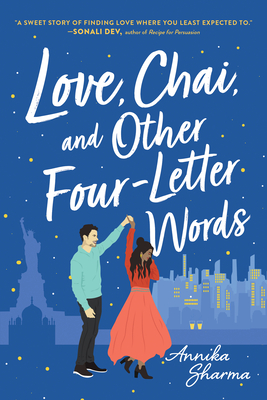 Goodreads description--A charming NYC romance by co-host of the Woke Desi, for fans of:
• multicultural connections
• strong friendships and families
• a “will they/won’t they” story with powerful stakes
• the city that never sleeps
• bucket list adventures
• characters who fight outside expectations and pressures to build the life they want

Kiran needs to fall in line. Instead, she falls in love.

Kiran was the good daughter. When her sister disobeyed her family’s plan and brought them shame, she was there to pick up the pieces. She vowed she wouldn’t make the same mistakes. She’d be twice the daughter her parents needed, to make up for the one they lost.

Nash never had a family. The parents who were supposed to raise him were completely absent. Now as a psychologist, he sees the same pattern happening to the kids he works with. So he turns away from love and family. After all, abandonment is in his genes, isn’t it?

If she follows the rules, Kiran will marry an Indian man. If he follows his fears, Nash will wind up alone. But what if they follow their hearts?