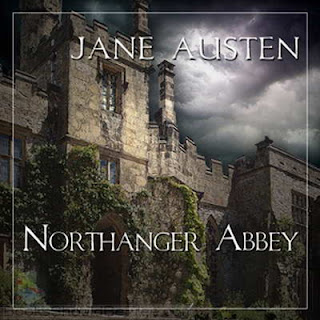 *Note: The above links to Amazon and Book Depositor are affiliate links. Affiliate links support giveaways for Somewhere Only We Know readers.

The story’s unlikely heroine is Catherine Morland, a remarkably innocent seventeen-year-old woman from a country parsonage. While spending a few weeks in Bath with a family friend, Catherine meets and falls in love with Henry Tilney, who invites her to visit his family estate, Northanger Abbey. Once there, Catherine, a great reader of Gothic thrillers, lets the shadowy atmosphere of the old mansion fill her mind with terrible suspicions. What is the mystery surrounding the death of Henry’s mother? Is the family concealing a terrible secret within the elegant rooms of the Abbey? Can she trust Henry, or is he part of an evil conspiracy? Catherine finds dreadful portents in the most prosaic events, until Henry persuades her to see the peril in confusing life with art.

Executed with high-spirited gusto, Northanger Abbey is the most lighthearted of Jane Austen’s novels, yet at its core this delightful novel is a serious, unsentimental commentary on love and marriage.

So it’s time to review another classic. Ugh, these are probably the hardest ones to review for me. I’d give Northanger Abbey 3 Stars. I did like this book and it definitely had moments where I was extremely curious to know what was going to happen next, but as with all of Jane Austen’s novels that I have read thus far, there are moments that are more boring in nature and therefore allow me to put the book down easily.

The more I read of Jane Austen’s writing and the more familiar I am with other works from the same time period, the easier it is to read these works. I’m more familiar with the phrasing and general canter of her writing style than I once was, but sometimes I still have to slow down in order to absorb what it is that she’s trying to say.

Northanger Abbey’s heroine, Catherine, appears to me to be surrounded by several people who’s speech is contradictory to their actually feelings or actions, Isabella, John Thorpe, and Mrs. Allen. And Catherine herself appears to me to be one of the most ignorant of Jane Austen’s heroines. I don’t mean that in a bad way necessarily. It’s just that Catherine doesn’t always know what is proper and usually defers her own judgment to those around her assuming that they know better than she does. While Catherine does appear perceptive in some cases, as in disliking John Thorpe very early on, she also appears the opposite in other cases, such as Isabella’s true nature as well as John’s supposed attraction to herself.

I like the fact that while Jane Austen’s heroines seem to be similar in some ways, they all have very different circumstances and experience which makes each story very much unique to itself. I do find that there has been in at least 3 of the novels that I’ve completely finished a character that I wholly dislike…and it’s usually the one that talks the most about things they know nothing about. In this case, it’s Isabella Thorpe. One thing I was disappointed in was the ending. It’s not that she didn’t satisfy my desire to know what happened or that I wasn’t pleased with the end result; however, she essentially summarized the ending rather than letting the reader experience it as it happened.

Anyway, a short read, but well worth it if you’re an Austen fan. If not, I wouldn’t suggest reading this one first, but work up to it.

Posted by Somewhere Only We Know at 6:53 PM