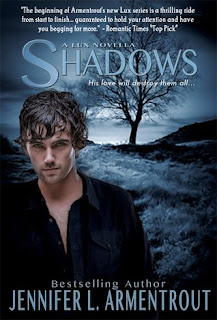 Goodreads description--The last thing Dawson Black expected was Bethany Williams. As a Luxen, an alien life form on Earth, human girls are…well, fun. But since the Luxen have to keep their true identities a secret, falling for one would be insane.

Bethany can’t deny the immediate connection between her and Dawson. And even though boys aren’t a complication she wants, she can’t stay away from him. Still, whenever they lock eyes, she’s drawn in.

Dawson is keeping a secret that will change her existence...and put her life in jeopardy. But even he can’t stop risking everything for one human girl. Or from a fate that is as unavoidable as love itself.

So I have no idea what happened to my original review of Shadows, but it has apparently disappeared. Whoops! That being said, it's been almost a month since I've finished Shadows so I apologize if this review isn't the best.

Though I love some Daemon, changing things up and reading more about Dawson was really nice. And I might have enjoyed it just as much if not more than the other books of the series.

Dawson is typically the good brother, whereas Daemon tends to cause trouble. So when Dawson decides to risk it all for Bethany, everyone pretty much freaks out.

I liked Bethany's reaction to Dawson's secret. It was realistic yet not the exact same as every other reaction of a heroine in similar circumstances.

Above all else, Shadows added an extra layer of depth to the Lux series. Everything makes more sense, and I'm thrilled to have this extra piece of the puzzle. Shadows gets 4.5 Stars from me.

Have you read Shadows? If so, what did you think? Let me know!

Posted by Somewhere Only We Know at 6:41 PM