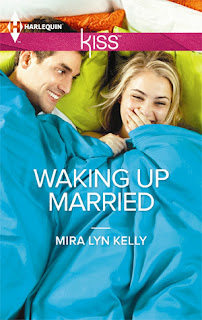 Source: Publisher via NetGalley (Thank you!) Currently free on Amazon.

Goodreads description--Her first thought: "Who are you?"

It's the morning after her cousin's bachelorette party in Vegas and Megan Scott wakes up with the mother of all hangovers. Even worse, she's in a stranger's penthouse having woken up with something else as well—a funny, arrogant, sexy...husband!

Up until now, finding even a boyfriend had seemed impossible—been there, got the broken heart, sworn off men for good. Then a few martinis with Carter...no, Connor Reed and she's gone from first meet to marriage in one night!

So apparently I completely missed the fact that this was labeled in the romance genre. Contemporary romance to be exact. So while the cute cover comes off as playful and almost teen-ish (IMO), I was surprised to find it as....descriptive and to the point as it was.

Waking Up Married is far from the most descriptive book I've ever read (and by descriptive...you know what I mean), but I don't read this genre often. And so yeah, I was a bit surprised with it's content. Now I'm not saying I want steamy, half-naked people on the cover, but the cover is way to teen in my opinion for the actual content.

Now, on to the story.

I was actually impressed with Waking Up Married. I expected it to be a cute, quick read with not much weight or depth to it, and while it's no psychological thriller, I was impressed with the psychology behind the story and the characters. It ended up playing on the idea that sometimes no matter how hard we try to avoid becoming one way or another, we very much end up the exact thing we're trying to avoid. And also, no matter how much we try to the contrary, sometimes we end up seeking out repetitive, destructive patterns in our personal relationships that we're not even consciously aware of. I liked that. It made the characters deeper and more real to me.

Now I'm not suggesting that this book is at all realistic, but that's not always the point. Sometimes I criticize a book for not being more realistic and sometimes it's just nice to read for the sake of reading without analyzing every single aspect.

I did end up reading Waking Up Married in one day. I started it probably about 8:00 pm while visiting with my in-laws (isn't that awful of me? I wasn't bored, just multi-tasking) and finished around 2:00 am the next morning. I was interested in continuing to read, but I probably could have put it down. My husband was wide awake, so I wasn't rushing him to go to bed since we didn't have to work the next day, and it just sort of worked out well.

As I said, overall I was impressed with Waking Up Married. It ended up being much more than I expected it to be and since I wasn't expecting the descriptions I got, it was just a surprise all around.

Posted by Somewhere Only We Know at 5:27 PM