Love and Other Perishable Items - Review 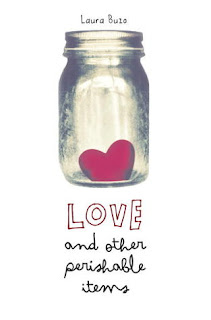 Love and Other Perishable Items

From the moment she sets eyes on Chris, she is a goner. Lost. Sunk. Head over heels infatuated with him. It's problematic, since Chris, 21, is a sophisticated university student, while Amelia, is 15.

Amelia isn't stupid. She knows it's not gonna happen. So she plays it cool around Chris—at least, as cool as she can. Working checkout together at the local supermarket, they strike up a friendship: swapping life stories, bantering about everything from classic books to B movies, and cataloging the many injustices of growing up. As time goes on, Amelia's crush doesn't seem so one-sided anymore. But if Chris likes her back, what then? Can two people in such different places in life really be together?

Through a year of befuddling firsts—first love, first job, first party, and first hangover—debut author Laura Buzo shows how the things that break your heart can still crack you up.

Love and Other Perishable Items is basically about this girl, Amelia, who starts working at this grocery store and falls into a majorly huge crush on a co-worker, Chris. Problem is: Amelia is 15 and Chris is 21.

Now, I personally can't say anything against relationships that span a significant age difference. My husband is 12 years older than myself. That means he was a senior in high school when I was in first grade. He was driving unsupervised when I was 4. We met when I was barely 18 and he was just turning 30. But compared to his sister who's husband is 20 years older than her, our age difference isn't so bad either.) It's all relative. But it's true that 15 is VERY young and while the 6 year age gap between Amelia and Chris might not be a problem when she's 20 and he's 26, there's quite a gap between 15 and 21 (just as there's quite a gap between 4 and 16 or 6 and 18).

As you can imagine, things don't always go as Amelia hopes and plans. At the beginning of the book, I remember thinking that she sounded very young and immature, and still throughout the book there were moments when her age really shined through like this towering beacon.

Upon finishing Love and Other Perishable Items, I was tempted to question whether I'd just wasted the last day and a half reading this. But ultimately I settled upon no. While Love and Other Perishable Items probably won't stand out to me as an epic read that I must return to over and over, it was a nice take on coming of age, growing up, and first crushes that are easily mistaken for love.

I will note that Chris's abundance in the use of alcohol, drugs, and other general maleness was quite annoying to my 26 year old self. 15 year old me would have probably been in love with him too (as sad as that is to say).

Posted by Somewhere Only We Know at 6:11 PM