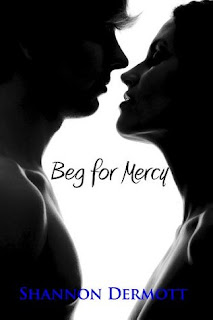 Goodreads description--Everyone dreams of that first kiss. Of that magic moment when your lips finally meet those of that special person you’ve waited your whole life for. A little awkward, a little scary, a little hot and every bit amazing. We speculate that the whole world will shake and time will just stop. No one, however, ever imagines that kiss to bring Death himself knocking.

Sixteen year old Mercy Moore's life just got more complicated. The kiss that originally could have meant she would finally have a boyfriend now was the kiss that could have very nearly ended his life. A small detail her mother conveniently never told her will take her life for an abrupt u-turn. Dating, no love, was now completely and utterly impossible. And the boy well, that boy would never be the same.

But life, however cruel, goes on. Far too soon for her taste, Mercy finds herself at a senior party with the elite students of her school and her best friend. And of all things, playing a stupid game that could very well mean the death of someone in that small room. If it were not for her best friend, the hottest guys in school, and a small need to fit in, she may have been able to escape the disaster that was to come. Her worst nightmare, her personal curse, her very life, only gets dangerously worse.

This is a young adult paranormal romance novel.

I can't say I exactly blew through Beg for Mercy, but I did read it pretty quickly. People complain about getting sick of love triangles, HA! Beg for Mercy was more like a love octagon. There are 4 main guys vying for Mercy's attention and affection but several others make an appearance even if only momentarily.

First, let me back up. As the Goodreads description says, Mercy has no idea that she's not normal. And a few years back she goes in for her first kiss. The problem is, Mercy's a succubus and kissing steals the life-force from the person she's kissing. And thus she almost kills Paul, the guy she's got a huge crush on.

Fast forward two years and Mercy has sworn off dating and Paul is pretty much her best friend. Again as the description says, Mercy finds herself at a senior party playing spin the bottle no less, (why she thought that was a good idea at all blows my mind) and she find herself winning the attention of two other guys, Flynn and Luke--who just happen to be best friends. Enter the love square.

I don't want to give the whole story away, but as I said above, there's at least one other guy that makes for a regular love pentagon. And truthfully I found myself unsure of which guy I'm rooting for to actually be with Mercy. There was probably two that I was leaning toward. One of which hasn't stepped up the way I really need him to in order to fill that position, and the other we find out is truly forbidden above all else. And quite frankly I feel like the forbidden love that finds a way is a bit overdone. What about forbidden love that stays forbidden?

As far as the book itself is concerned, I did find some typos and errors and in general some sentences that never made sense no matter how many times I read them. I find myself trying not to be too critical because I know grammar isn't my strong suit and I'm sure my blog is filled with typos and errors, but these people have editors (or they should). And more than the author, I guess it's the editors that I really do blame for letting this stuff through. Though we are all human and make mistakes.

Posted by Somewhere Only We Know at 4:58 PM