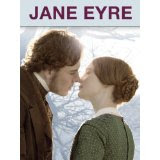 Goodreads description--Orphaned into the household of her Aunt Reed at Gateshead, subject to the cruel regime at Lowood charity school, Jane Eyre nonetheless emerges unbroken in spirit and integrity.

She takes up the post of governess at Thornfield, falls in love with Mr. Rochester, and discovers the impediment to their lawful marriage in a story that transcends melodrama to portray a woman's passionate search for a wider and richer life than Victorian society traditionally allowed.

With a heroine full of yearning, the dangerous secrets she encounters, and the choices she finally makes, Charlotte Bronte's innovative and enduring romantic novel continues to engage and provoke readers.

My 5th and 6th grade reading teacher read Jane Eyre to us one of those years (I can't remember which), but she skipped some sections, and I truly didn't remember too much about the story. I remembered there being a crazy woman living in the house and I remembered Jane being a governess because that was the first time I learned what a governess was. So when I decided this year to add reading six classics to my goals for the year, Jane Eyre made obvious sense to me. Plus I saw the recent film adaption and loved it--which of course ruined any surprises for me, but that's okay. I'm not complaining.

It took me a while to get into the story. I guess it was really by the time Jane reached Lowood school that I really ended up getting into it. Helen is one of my favorite characters in a long time. While she doesn't have a huge part in the story, she makes a huge impact on Jane. She helps Jane to see past her anger and hatred. She tames her in a sense. Plus in a world that is so largely anti-Christian, I eagerly devoured a character that appeared to me to demonstrate true faith and true Christianity. Today's YA literature sorely lacks a representation of accurate Christian characters. Mind you, I'm not talking about Christian literature. While I realize this story takes place in an entirely different era than the one we're now living, it was entirely refreshing to find talk of God, religion, and spirituality so repeatedly mentioned, discussed, and indicated as part of their daily lives. Of course, we do have to throw in a Mr. Brocklehurst who completely misuses and abuses Scripture and religion. There must be one of those--and in truth there are many Mr. Brocklehursts alive today that give Christianity a bad name.

I applaud Jane over and over for making the hard choices. For sticking to her beliefs when the very core of her being wishes to follow after it's desires. She sees that she must respect herself because if she does not then no one else will. She sees that Mr. Rochester truly would have lost respect, admiration, and love for her had she indeed stayed, for she would no longer be who and what he fell in love with. And I can't help but wonder, if this book had not been a classic but a modern day story, how many readers would have thrown the book across the room and been utterly angry with Jane for not staying? For not satisfying her every whim and desire?

St. John was utterly confusing to me. While I appreciated how much Jane could still look at him as a brother and a good person, it was hard to watch that relationship develop. It reminded me of an emotionally abusive relationship and again I have to applaud Jane for standing her ground in not marrying him and being able to see that to do so would be to commit a suicide of sorts. I wish our teenage girls today were as self-aware.

Jane Eyre was another story where one party decides to better himself in order to be worthy of the other party. Yet again, another aspect I wish we saw in today's world more often. While Jane was utterly terrified of what would become of Mr. Rochester--what he would run off and do--after she left, he did nothing of which she feared, and it's because of her that he didn't.

I realize that reviewing a classic such as Jane Eyre is a bit risky and there's probably nothing I can say that hasn't already been said, but I enjoyed the overall story so much that I couldn't help but want to spread the love.

Jane Eyre gets 4 stars from me. Have you read Jane Eyre? What did you think? Let me know!

Posted by Somewhere Only We Know at 6:21 PM