A Shade of Vampire - Review 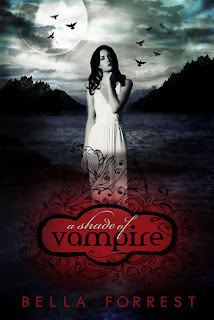 Source: Author in exchange for an honest review(Thank you!!)

Goodreads description--On the evening of Sofia Claremont's seventeenth birthday, she is sucked into a nightmare from which she cannot wake.

A quiet evening walk along a beach brings her face to face with a dangerous pale creature that craves much more than her blood.

She is kidnapped to an island where the sun is eternally forbidden to shine. An island uncharted by any map and ruled by the most powerful vampire coven on the planet. She wakes here as a slave, a captive in chains.

Sofia's life takes a thrilling and terrifying turn when she is the one selected out of hundreds of girls to join the harem of Derek Novak, the dark royal Prince.

Despite his addiction to power and obsessive thirst for her blood, Sofia soon realizes that the safest place on the island is within his quarters, and she must do all within her power to win him over if she is to survive even one more night.

Will she succeed? ...or is she destined to the same fate that all other girls have met at the hands of the Novaks?

I'm always a bit wary when an author contacts me to review their book. I mean initially I was so stoked to even be considered and asked that I didn't pay much attention to what I was being asked to read. And as I'm sure most bloggers have had similar experiences, the first few I was asked to read and I agreed to weren't the most high quality material. However, I've been pleasantly surprised more than once, and A Shade of Vampire is one that falls into that category.

The only issues I really had with A Shade of Vampire is that the two main characters didn't have distinct enough voices. For instance, Sofia uses the word "sup" earlier in the book when Derek is nowhere around (or it may have even been in her head), and later Derek uses that same word. I understand that "sup" (as in eating, dining, etc) is a common enough word for more than one person to be familiar with it. But it's not a common enough word for two people to use in every day conversation in the exact same context--at least people that I know. This happens again later in the book. Sofia is thinking to herself that she has reservations about something Derek has asked her to do, and Derek immediately tells her that he understands that she has reservations. I think the author should have chosen a different word from Sofia to Derek. It's one thing for Derek to be able to read her facial expressions and get the general concept of what she's thinking, but to use the exact word she just thought (without the ability to read minds) is just a bit too much for me. Rookie mistakes, and not even a huge issue. Just a minor peeve of mine--I need the characters to have distinct voices and for the author to maintain a proper awareness of what information each characters has.

The story line wasn't necessarily completely original, but I was hooked fairly early on, and from there, I didn't really want to put the book down. That was a combination of knowing it was only 149 pages so it should be a quick and easy read for me and actually being invested in the story.

The main characters feel fairly well flushed out in the author's mind--she seems to know all of the backstories to each of her characters. However, much of the past has yet to be revealed. I was worried when Sofia talks about how the doctors haven't been able to fully diagnose her and with the disorders that she mentions in relation to herself, I was fully prepared to hate her. Such paranoia was unnecessary on my part.

Email ThisBlogThis!Share to TwitterShare to FacebookShare to Pinterest
Labels: AShadeofVampire, BellaForrest, YA