Gameboard of the Gods - Review 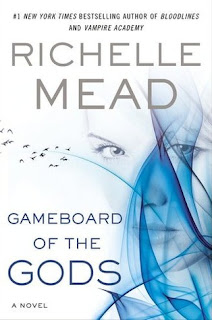 First off, Gameboard of the God has a lot of information that needs to be taken in and absorbed. Richelle Mead has created an extremely technical new world, and the new terminology was a lot for me to follow without having a complete written world history for RUNA and what other surrounding countries may be left after the Decline. Luckily Richelle Mead does have a post on her blog about Gameboard of the Gods: History and Background. I did have to access Richelle Mead's blog post about a glossary for Gameboard of the Gods at time or two, and that helped some.

Because there was so much to learn about the country and current state of the world, I found that Gameboard of the Gods didn't feel story driven for me as many of Richelle Mead's other books have. However, I've read enough of her work (12 books, I believe), to trust in her ability to carry this story through her series and pull me in further. It kind of reminds me of reading Bloodlines. There's so much setup that's needed that I didn't get to really enjoy the story just yet. But like I said, I have faith that it's coming.

I have to say that I spent half of the book being completely miffed at this world that Richelle Mead has created. It all felt like a complete political statement. RUNA comes off, and it's citizens fully believe this, as being the perfect society. There are identity chips in every citizen's arm. They're extremely technically advanced. There are gun control laws where no citizen should be able to have access to any gun. As well as the number one rule that the country as a whole not only doesn't believe in deity, but religion is basically outlawed. There are some licensed practitioners and organizations, but it's all very regulated and as a general rule the citizens of this country do not believe in a God or gods. Annoying political statement. I read for fun, not to have political agenda forced down my throat.

However, as I progressed through the book, it became clear about halfway through the book that this society can't stay this way forever. The book is titled Gameboard of the Gods afterall. There must be some deity floating about in this world that Richelle Mead has created. It's my opinion that this carefully constructed, "perfect" society will fall apart throughout the series, and truthfully I pray for that to be the case. There will never be a "perfect" society because humanity at it's core is imperfect. That's just my two-cents.

The narrative switches between three POVs. Justin, a servitor--servant of truth--who's job is essentially to disprove the existence of any deity. Mae, Justin's bodyguard, and a praetorian--the most elite branch or group of RUNA's military. And Tessa, an sixteen year old immigrant Justin arranged to have brought to RUNA on a student visa. Justin was a bit annoying to me as he plays the role of a guy who will sleep with any girl he can get in his bed despite being extremely intelligent. I guess out of everyone I connected with Mae the most. She's spent her whole life with people vying for control over her. She just wants to make her own decisions and her own mistakes. Then there's Tessa. I liked her, but she did have an annoying teenager quality about her. I hope to see more development for her in the future books.

Some plot points and story lines were left open, which makes sense considering this is just the first book in a series. But apparently I missed the memo that this series was being upgraded from YA to Adult. I might be wrong, but I could have sworn Richelle Mead's first blog post about the Age of X series said this was going to be a YA series. Heads up for anyone else who might have missed the memo: this is an adult novel.

All points considered, I'm giving Gameboard of the Gods 3 Stars. There was so much information that needed to be swallowed in order to follow this new world thus taking away some from the story for me. But I trust Richelle Mead and look forward to reading the future installments of the Age of X series.

Have you read Gameboard of the Gods? What did you think? Let me know!