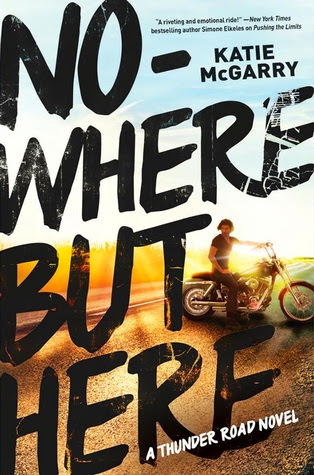 Source: Publisher via NetGalley (Thank you!!) (Also pre-ordered a kindle edition for my personal library)

Goodreads description--An unforgettable new series from acclaimed author Katie McGarry about taking risks, opening your heart and ending up in a place you never imagined possible.

Seventeen-year-old Emily likes her life the way it is: doting parents, good friends, good school in a safe neighborhood. Sure, she's curious about her biological father—the one who chose life in a motorcycle club, the Reign of Terror, over being a parent—but that doesn't mean she wants to be a part of his world. But when a reluctant visit turns to an extended summer vacation among relatives she never knew she had, one thing becomes clear: nothing is what it seems. Not the club, not her secret-keeping father and not Oz, a guy with suck-me-in blue eyes who can help her understand them both.

Oz wants one thing: to join the Reign of Terror. They're the good guys. They protect people. They're…family. And while Emily—the gorgeous and sheltered daughter of the club's most respected member—is in town, he's gonna prove it to her. So when her father asks him to keep her safe from a rival club with a score to settle, Oz knows it's his shot at his dream. What he doesn't count on is that Emily just might turn that dream upside down.

No one wants them to be together. But sometimes the right person is the one you least expect, and the road you fear the most is the one that leads you home.

I’ve really enjoyed every single Katie McGarry book that I’ve read. And now that she’s swapped series to something very different, I feel 100% confident adding her to my auto-buy list. I was really intrigued with the idea of a young adult series based around a motorcycle club. Personally, I’ve not been exposed to that culture very much throughout my life (aside from what you see on TV). And Katie McGarry didn’t do me wrong. I was hooked quickly and pretty much read until I finished.

As the description says, Emily grew up not having anything to do with her biologically father. Her mother gets married when she’s young and her would-be-new-stepfather decides to make it official and adopt Emily as well. Emily’s still curious about her biological father (Eli) and after asking questions about him, her mother agrees to let him come visit once a year. Even though Emily knows who he is, she doesn’t really know him except that he’s in a motorcycle club that her mother fears and he is covered in tattoos. When Emily’s parents are notified that Eli’s mother has passed away, Emily is forced into going to Kentucky to visit Eli’s hometown. Only things aren’t as they appear. Olivia (Eli’s mother) is still alive, although losing her battle with cancer. Emily learns that Eli and her mother both have been keeping secrets from her, and she’s determined to find out what those secrets are. Plus this motorcycle club isn’t the gang that Emily’s built up in her mind or what her mother has led her to believe. Emily doesn’t really want to be there, but she has to learn about this side of her life.

The description hits the nail on the head when it says that all Oz wants is to be accepted into the club, Reign of Terror. He’s grown up being around the club his whole life. His father is a member, and Eli and Cyrus (Eli’s father) are just as much family to him as anyone he’s blood related to. He’s so close to getting prospected that he can taste it. But while Emily is in town, his one job is essentially to babysit her. He’s supposed to make sure that no one harms her plus keep her as far away from those secrets Eli’s been keeping from her as possible. Part of the trouble is, Oz isn’t even sure what the whole truth is himself.

Emily and Oz have an immediate attraction to each other, but they also have one of those antagonistic relationships that I love so much. All Oz can see is that Emily’s presence is upsetting those he cares about most. So as far as he’s concerned, she can go right back where she came from. Emily can feel Oz’s resentment and she responds accordingly. But the two are thrown together for an extended period of time and even though there’s an antagonism about the relationship, Emily trusts Oz—more than pretty much everyone else around her during this time. So defenses start to soften and attraction begins to win over.

I was worried that the big secret between Eli and Rachel (Emily’s mother) would turn out to be something small that they could have just explained to Emily from the beginning and prevented a bunch of suspense and drama. But I was pleasantly surprised with what Katie McGarry decided to do with this aspect of the story. I didn’t predict everything, and I had that sense of needing to go back and reread to see if I missed anything. I do think that had Eli and Rachel been upfront with Emily from the beginning, that would have been easier on everyone, but I could see why they chose not to be.

The side characters all felt very alive. Chevy, Razor (who I can’t wait to read about next), Stone, and Violet were all easily likeable and characters that I want to know more about. Even the adult crowd felt flushed out and alive: Eli, Olivia, Cyrus, Oz’s parents.

-“Isn’t it always the things that you can’t see that hurt you?”

-“I’m scared of a ton of things and all of them have to do with losing the people I love.”

-“Trust me to chase your monsters away.”

Nowhere But Here does have some language and some mild sexual scenes—nothing too graphic. But I really want to applaud Katie McGarry for having another book where the couple doesn’t go all the way in a genre where it is increasingly popular for the characters to cross those lines.

Overall, I really adored this book. The characters were alive. And I loved the love/hate relationship between Emily and Oz. They were an easy couple to root for in my opinion. The secondary characters were all just as alive, and I can’t wait to learn more about them throughout the other books in the series. I think the big secret was handled in a way that I could get behind. And I just love Katie McGarry’s writing. Nowhere But Here gets 4.5 Stars from me. Have you read Nowhere But Here? What did you think? Let me know!