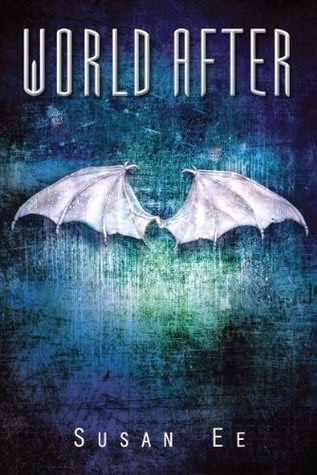 Goodreads description--In this sequel to the bestselling fantasy thriller, Angelfall, the survivors of the angel apocalypse begin to scrape back together what's left of the modern world.

When a group of people capture Penryn's sister Paige, thinking she's a monster, the situation ends in a massacre. Paige disappears. Humans are terrified. Mom is heartbroken.

Penryn drives through the streets of San Francisco looking for Paige. Why are the streets so empty? Where is everybody? Her search leads her into the heart of the angels' secret plans where she catches a glimpse of their motivations, and learns the horrifying extent to which the angels are willing to go.

Meanwhile, Raffe hunts for his wings. Without them, he can't rejoin the angels, can't take his rightful place as one of their leaders. When faced with recapturing his wings or helping Penryn survive, which will he choose?

World After picks up almost immediately where Angelfall left off. Penryn’s just waking up from being paralyzed by the scorpion sting. Raffe thinks she’s dead—everyone around her thinks she’s dead. And so when she wakes she’s pretty much treated like a freak who’s come back from the dead. It just so happens that Paige, Penryn’s sister, is also treated like a freak because of the surgeries that the angels did on her. And then well, Penryn’s mom pretty much is crazy. So that rounds out their whacky family.

And to add to the crazy, Paige can’t keep any food down. Penryn’s afraid of what exactly Paige might have a craving for. And as a result, Paige sets out on her own and Penryn has to go hunting her down again. In the meantime, Raffe is still trying to get his wings back from Beliel while keeping his new demon wings a secret from the other angels.

I have to say that I didn’t love World After as much as Angelfall because Penryn and Raffe are separated for the majority of the book. We all know that I’m a sucker for romance. I mean 95% of the books that I read I’m looking for that romantic relationship. So Penryn and Raffe not being together wasn’t as enjoyable for me to read. Penryn was lucky enough to experience some of Raffe’s past memories through his sword which is still in her possession. The sword is now bonded to Penryn, and as part of the bond the sword is determined to teach Penryn how to use her properly using some of Raffe’s memories as teaching exercises. This showed Penryn more of Raffe and only served to increase her feelings for him.

I really enjoyed the moment that they finally reunite, and I actually liked the fact that they didn’t just jump into “everything’s okay now” mode because these two still have a lot to work out between them before they can have a true relationship. I loved seeing the trust and dependence that’s already built up between them. And I can’t wait to see how this plays out in End of Days.

-Sometimes, I just have to let go and let my inner Mom out.

World After was a good middle book for a trilogy. It wasn’t nearly as good for me as Angelfall because of the amount of time Penryn & Raffe spent apart, but I look forward to that not being the case in End of Days. I don’t know that the overall storyline progressed much in World After, but I wasn’t annoyed or frustrated through the entire reading of it either. World After gets 4 Stars. Have you read World After? What did you think? Let me know!