All Played Out - Review 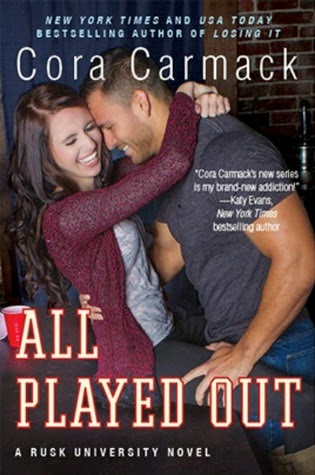 All Played Out (Rusk University, # 3)

Goodreads description--First person in her family to go to college? CHECK.
Straight A’s? CHECK.
On track to graduate early? CHECK.
Social life? …..yeah, about that….

So Nell does what a smart, dedicated girl like herself does best. She makes a "to do" list of normal college activities.

Rusk University wide receiver Mateo Torres practically wrote the playbook for normal college living. When he’s not on the field, he excels at partying, girls, and more partying. As long as he keeps things light and easy, it's impossible to get hurt... again. But something about the quiet, shy, sexy-as-hell Nell gets under his skin, and when he learns about her list, he makes it his mission to help her complete it.

Torres is the definition of confident (And sexy. And wild), and he opens up a side of Nell that she's never known. But as they begin to check off each crazy, exciting, normal item, Nell finds that her frivolous list leads to something more serious than she bargained for. And while Torres is used to taking risks on the field, he has to decide if he's willing to take the chance when it's more than just a game.

Together they will have to decide if what they have is just part of the experiment or a chance at something real.

I feel like the description gives a slightly wrong impression about All Played Out and Nell. First off, Nell is completely happy with her plans and her life. It isn’t until her roommate, Dylan from All Broke Down, points out that Nell hasn’t exactly approached college as she would any other science experiment that Nell starts to do some re-evaluation. Dylan tells Nell that Nell basically chose a course for herself and went down it headlong with no thought to exploring other options…choice of career or social life. Dylan herself recently re-evaluated what was important to her and so she can understand that Nell might be making the same mistake. Nell realizes she’s right. From a purely scientific approach she would never just pick an outcome and then put all of her efforts behind that outcome without first experimenting to see if other possible outcomes might fit as well or better. I hate to even use the word experiment because when I think of college and experimentation I usually think weird sexual experiences or drug use. That wasn’t really the case. But Nell does start a list of things that would be considered “normal” college experiences and we go from there.

Not the first item on her list, but very close to top is “make new friends.” And this is what leads Nell to Mateo. Dylan brings Nell along to an Ultimate Frisbee game that her group of friends is having and things progress from there. Mateo is known by his friends as being shameless, a comedian, rarely taking anything too seriously. But that’s really just the face he puts on to help him deal with heartbreak from his past. It’s a distraction for him. He realizes almost immediately that if he were to pursue anything with Nell it wouldn’t (couldn’t) be a casual hookup like he’s used to doing. And surprisingly he seems okay with that from the beginning even if he’s not really seeking to form an established relationship with her either. But one thing is for certain, he wants to help Nell cross off all of the items on her list.

I liked how Nell and Mateo’s relationship had a slower build than Dylan and Silas’s. They do have several physical encounters throughout the book and the language was there, but it wasn’t near as bad as the Stage Dive series that I finished up recently. I definitely appreciate not being bombarded with the f-bomb every other page. Yet I probably wouldn’t label Nell and Mateo in the epic romance column either. I did enjoy All Played Out more than book 2. And I will say that I actually enjoyed the conflict for All Played Out. It wasn’t exactly what I was expecting, and while it did serve as a hurtle that the couple had to overcome, I didn’t feel like it was completely blown out of proportion or over-exaggerated either.

-I wanted a catalyst. He’s more like an atom bomb.

-I need someone to believe with me. To believe for me when I can’t believe myself.

All Played Out might not go down in my epic romance category, but I did enjoyed it and finished it in one day. The characters were likable and I enjoyed the buildup of their relationship from friends to more. And specifically, I enjoyed that the conflict didn’t feel like too much or overly dramatic as can be common with the new adult genre. All Played Out gets 4 Stars from me. Have you read All Played Out? What did you think? Let me know!