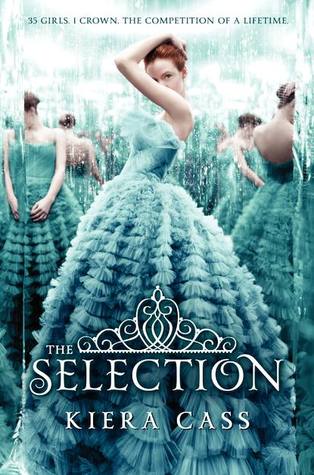 The Selection received a lot of hype back when it was first released. The more hype I saw the more interested I was in reading this book—especially after my friend Paula enjoyed it so much. However, we all know that hype isn’t always a good thing. Sometimes our expectations get too high. So I tried to go into this book expecting to vaguely like it and hoping to be impressed beyond that. I briefly saw mention on a Goodreads review a reference to Kiera Cass’s behavior but there were no details so I have no idea what that’s about, and I don’t think I want to know either. I just wanted to mention that my opinion of the book is in no way influenced by anything other than my experience. And I have to say, I was highly impressed.

Let me start out by saying that there were some flaws. One of the biggest conflicts of the book (and series maybe?) was glaringly obvious from the very beginning. The book description tells us that being chosen for The Selection wasn’t something America wanted. She wanted to find a way to marry her secret boyfriend, Aspen. Yet, she had no idea that she would end up with a connection to Maxon like she does and so we’ve obviously got a triangle in the making. Love triangles don’t bother me, but train wrecks do. And this love triangle is heading for one big train wreck. Plus the conflict with Celeste (another of The Selection candidates) seems like it could be handled so easily and I hate when that happens. I believe those were my main two gripes.

Let’s talk about the world for a bit before I get into what I did like. The country is set up in a caste system of numbers. Royals and family are 1s. The extremely wealthy are 2s. And it goes down from there. We don’t know much about the jobs for every caste, just a few specific ones. 2s seemed to be celebrity types—models, actors, etc. 4s were mentioned to be teachers. 5s (America’s caste) were all about the arts, music, painting, sculpting, dance, etc. 6s were the serving class. 8s were homeless. And apparently there are some citizens that don’t even qualify as 8s. Where princesses of the Royal family are usually married off to sons of foreign diplomats to secure alliances, princes are married to one of the women from the nation to ensure patriotism and all of that jazz—to help stabilize the nation within itself. Enter The Selection. All teenage girls between the ages of 16 and 18 were eligible to enter The Selection. 35 girls are chosen for The Selection, go through a makeover process, and sent to live in the castle for the prince to eliminate or keep based on his connection with them. Not all, but parts of The Selection and life at the castle are filmed and aired to the country.

At the beginning of The Selection, America and Aspen have been seeing each other secretly for roughly two years. America is a 5 and Aspen is a 6. It is possible for citizens to move castes, but there’s a lot of paperwork associated and a marriage between the two would mean that America descends to 6 and not the other way around. Dropping to a 6 means that America’s life will get harder. She’ll have to work harder, leave her beloved music behind (for the most part), and possibly go hungry. She has the potential to go hungry even as a 5, but as a 6, she’ll likely never really feel full. Aspen doesn’t want this for her. He can’t see himself bringing her down to his level and so he talks her into applying for The Selection. She agrees only to appease him never dreaming that she’d get chosen for real.

I could see it. Truly I could. I didn’t think the caste issues were beyond being able to work out between Aspen and America, but I could also understand how Aspen would have a hard time making America’s life more difficult than it already was. And truthfully, I kind of respected him for that. Not necessarily the way he handled things before she left, but I could respect his desire to provide a better life for America. And America goes into The Selection process wanting nothing to do with Prince Maxon, nothing to do with the crown or potentially being the country’s future queen. She only wants the check that’s going to her parents for her involvement. But what she doesn’t expect is that Prince Maxon isn’t what she thought he would be. She still doesn’t care about the fancy dresses or jewels. But she does begin to see how Maxon cares about his country, he cares about choosing a bride that’s right for him, and he even cares about her.

America and Maxon start out as friends. She’s open with him about her motives for being there and offers to help him make his selection by being his friend and confidante. I believe America’s honesty and the fact that she doesn’t want anything from Maxon really allows him to be more relaxed and open with her and in turn actually find her appealing. One of those want-what-you-can’t-have kind of things. America tells Maxon about her broken heart and he helps her through it. And she begins to heal. This is why I found myself rooting for these two. The relationship that starts out as a friendship. The progress made in moving forward. The mutual respect and admiration for each other’s personalities and characteristics. And the belief that not only does Maxon truly care about America the most out of the other girls there, but that America might truly be the best qualified person for the job of future queen.

There were other things I thought were positives about The Selection, and I’m sure that there might have been a few other negatives. Overall, I was surprised and impressed with the depth of this story. I didn’t love the obvious conflict between America, Maxon, and Aspen. I wanted to pop America in the head a good bit there at the end, but conflict must go on so that the story can as well. I did really enjoy the development between Maxon and America and how she slowly changed from wanting nothing to do with The Selection to very much being involved and invested in the outcome. The Selection gets 4 Stars from me. Have you read The Selection? What did you think? Let me know!