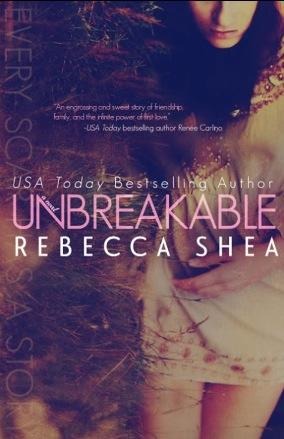 Goodreads description--Re-edited and updated as of September 7, 2013

*This book contains mature subject matter and is not intended for those under 17 years of age.*

Jessica Harper is the epitome of perfection. She's a good daughter, makes excellent grades, and always strays on the safe side of life. The last thing she thought would ever happen was falling in love with her best friend's brother. But sometimes fate just has a way of bringing two people together.

Wide receiver for the University of Arizona, Gabe Garcia, seems to have it all. When his feelings for Jessica come to surface, Gabe will give up everything to be with her.

But what happens when a tragedy abruptly changes the course of your life? For Jessica and Gabe, everything they thought they knew about each other will be questioned. Sometimes, there are scars in life that are cut too deep to completely heal.

Will their love prove to be unbreakable, or will it shatter and prove fate is just another lie?

I picked up Unbreakable because Colleen Hoover said she read it and really enjoyed it. Plus it was a freebie! Can’t pass that up, right? I’ve had Unbreakable in my possession for months and just haven’t gotten around to it. Well I’ve been trying to make my way through Deliverance (Deception, # 3) by CJ Redwine and while I’m enjoying it, the progress is just slow. I wanted something I could pick up, get hooked, and not put down until I finished. So I decided it was time to crack open Unbreakable (see what I did there?).

Jess has grown up being more a part of the Garcia family than she has her own. Her mother passed away when she was child and her father hasn’t gotten over it. As a means of coping, he’s thrown himself into his work as a firefighter, working his way up the ladder to Chief. Jess is so close to the Garcia’s that she actually calls them Mom and Dad. So when she starts developing feelings for Gabe it’s a little awkward. And she’s unsure if he could ever see her as anything more than his almost little sister. But Jess and Gabe have a moment and after that time looks are passed, touches here and there, and a few hinting comments have them moving forward in an inevitable direction.

Jess and Gabe were a great couple. The progress quickly into a physical relationship which draws them even closer together. Gabe is thinking in his head things that he’s never thought before—marriage, kids, a future. Everything seems like it’s going just swimmingly. Except that it wouldn’t be much of a book if that happily ever after takes place 45% in. I was loving their relationship and how committed they both were, but I just felt this growing pit in my stomach. Something bad is coming. It had to. And well…it did.

Trauma strikes and leaves both Jess and Gabe reeling. Yet the two react a bit differently. Jess needs space. She needs time to wrap her head around things and that means escaping. She takes an internship and moves across the country leaving a very devastated Gabe behind. Gabe is trying to be open to giving Jess whatever she needs. If that’s space then he’ll give her space. If it’s time then he’ll give her time. But it is killing him in the process.

Unbreakable is told from alternating perspectives. About 60% in a new narrator joins Jess and Gabe and that threw me for a loop. A third party means the happily ever after that I dreamed of for Jess and Gabe may or may not be possible. They may or may not be able to overcome. What if the “happily ever after” is meant to come about in a different way than I expected? NO!!!!

I was 100% hooked, but I won’t say I was as emotionally affected as I could have been. Jess made some decisions that weren’t my favorite even when I could understand why she made the choices that she did. Gabe had my heart as he stood loyal to Jess even through their time apart. I won’t say how things ended, but I’m definitely interested in checking out the other books in the series (which I didn’t know was a series until I finished Unbreakable). I will also say that Rebecca Shea definitely seemed like she knew her characters even when what she knew about them might not be clear to the reader. I can respect that. Ultimately Unbreakable gets 4 Stars from me. Have you read Unbreakable? What did you think? Let me know!