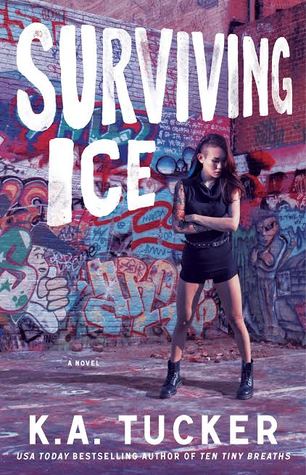 Ivy, a talented tattoo artist who spent the early part of her twenties on the move, is finally looking for a place to call home. She thinks she might have found it in San Francisco, but all that changes when she witnesses a terrible crime. She’s ready to pack up her things yet again, when a random encounter with a stranger keeps her in the city, giving her reason to stay after all.

That is, until Ivy discovers that their encounter wasn’t random. Not at all…

The Burying Water series hasn’t been as good to me as the Ten Tiny Breaths series by KA Tucker overall. Although, I did absolutely love Chasing River. Ivy has been present in more than one book in this series, but I can’t say I was particularly looking forward to her book necessarily. I mean I expected it to be good, but I guess I just don’t really relate to her aversion to commitment and stability. I can appreciate that not everyone is like me, but the more I can relate the more connected to a character I feel. I really enjoyed Ivy’s relationship with River’s brother in Chasing River. I guess it’s more realistic that her relationship with him would be temporary, but I guess I was more interested in him than I was her.

Ivy’s finally finds herself drawn to potentially settle down and call San Francisco home. Her uncle owns a tattoo shop there, and she’s been living with and working for him. Even though he was her uncle by marriage and not blood, he’s the reason why Ivy fell in love with tattooing to begin with. He sparked and cultivated her passion. And truly he’s been more like a father figure than her own even though he’s surly and often cold. As the description says, Ivy witness a horrible crime that results in her being very much alone in a place that was beginning to feel like home. And even though she’s normally tough and completely capable of taking care of herself, she finds herself jumpy and scared. Enter Sebastian.

Once a Navy SEAL who served multiple tours overseas, Sebastian now works for a private security firm that is contracted by the government to handle some jobs that the government can’t get their hands dirty in. He’s fully invested in his job as being necessary for the greater good. He might have to kill a few to save thousands…maybe even millions. And he’s okay with that. He gets a call for a new assignment…there’s an incriminating video that a young woman may or may not know anything about that could destroy the company he works for with lies. His assignment: recover the video and determine if the woman is a risk that needs to be eliminated.

Of course, feelings begin to develop and Sebastian realizes that Ivy needs his protection more than his employer does. These two develop feelings and their relationship progresses pretty quickly. It didn’t necessarily feel too quickly while I was reading the book, but looking back the timeline really only spanned a couple of days before things started heating up. There weren’t too many descriptive scenes even if the reader knows what’s going on, I appreciated the description level being kept to where it was.

It really took no time for KA Tucker to hook me into her story and have me more involved in the characters than I expected to be. While I didn’t relate to Ivy’s typical anti-commitment nature, I could connect to her love and passion for her uncle, for her art, her fear over what she witness, and of course her feelings for the handsome stranger. Sebastian had me with his struggle to do the right thing even when it meant going against someone he cared about and respected. I blew through this book and any time I was forced to put it down I was thinking about it and wanting to come back to it.

Surviving Ice is probably my second favorite book of the series. The ending felt a bit rushed to me and of course everything tied up perfectly. But I didn’t let that ruin my experience as I couldn’t quit thinking about this book when I was away from it. I connected to the characters more than I expected to, and I enjoyed how the pieces of the puzzle ended up fitting together. Surviving Ice gets 4 Stars. Have you read Surviving Ice? What did you think? Let me know!