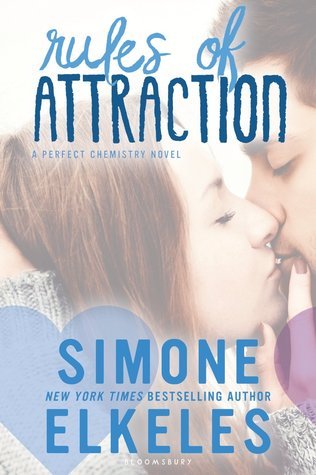 Goodreads description--When Carlos Fuentes returns to America after living in Mexico for a year, he doesn’t want any part of the life his older brother, Alex, has laid out for him at a high school in Colorado . Carlos likes living his life on the edge and wants to carve his own path—just like Alex did. Then he meets Kiara Westford. She doesn’t talk much and is completely intimidated by Carlos’ wild ways. As they get to know one another, Carlos assumes Kiara thinks she’s too good for him, and refuses to admit that she might be getting to him. But he soon realizes that being himself is exactly what Kiara needs right now.

I really wasn't sure until close to the end of Perfect Chemistry if this series was going to carry on following Alex and Brittany or move on to other characters. Because Perfect Chemistry wrapped up the way that it did I figured the following books would follow other characters, and I was both excited and disappointed to find out that this was in fact the case. I liked Alex and Brittany so much that I hoped to read more of them, but to find that Rules of Attraction is about Alex's younger brother, Carlos, was exciting too. Even though this book was about different main characters, Alex and Brittany are both very present and their storyline progresses throughout as well.

I expected Carlos's story to be him and Destiny--the girl he was crushing on during Perfect Chemistry--but I'm glad that wasn't the case because how often do we get stuck on one crush throughout our early teens? I wasn't expecting to find that Carlos is almost excited about the gang life that his brother almost died to escape. At least that's the way he comes off at first. Of course, we learn that there's more to it than him just seeking out dangerous people and situations. Even when he was living in Mexico for a brief time his family was being threatened unless he joined up. And that's why he's sent to live with his brother in Colorado.

I liked Kiara early in the book. When she's assigned to help Carlos around the new school for his first week the two don't exactly hit things off. I loved that Kiara chooses to prank Carlos as a way of retaliation for his smart (and he thinks smooth) mouth. After a run in with the police over some drugs, a judge determines that Carlos needs a more stable home environment. Kiara's parents take him in, and the two are forced into close quarters. A small thing that I noted is how Kiara mentions that she's not skinny in an intimate moment with Carlos. This isn't something mentioned over and over throughout the book. She didn't seem to have a complex, but she did seem a little insecure. I thought this was spot on for so many girls out there.

I enjoyed how Kiara and Carlos moved into exclusivity without much of a fight or the typical angst that might come from many other teens. Of course, Carlos has a way of finding trouble so things aren't completely easy between these two all the time. Not to give too much away, but I liked how Carlos didn't tackle his biggest issues alone.