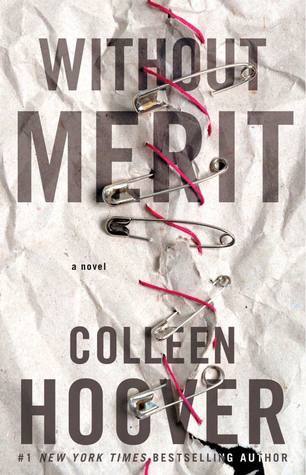 Goodreads description--Not every mistake deserves a consequence. Sometimes the only thing it deserves is forgiveness.

The Voss family is anything but normal. They live in a repurposed church, newly baptized Dollar Voss. The once cancer-stricken mother lives in the basement, the father is married to the mother’s former nurse, the little half-brother isn’t allowed to do or eat anything fun, and the eldest siblings are irritatingly perfect. Then, there’s Merit.

Merit Voss collects trophies she hasn’t earned and secrets her family forces her to keep. While browsing the local antiques shop for her next trophy, she finds Sagan. His wit and unapologetic idealism disarm and spark renewed life into her—until she discovers that he’s completely unavailable. Merit retreats deeper into herself, watching her family from the sidelines when she learns a secret that no trophy in the world can fix.

Fed up with the lies, Merit decides to shatter the happy family illusion that she’s never been a part of before leaving them behind for good. When her escape plan fails, Merit is forced to deal with the staggering consequences of telling the truth and losing the one boy she loves.

I'm not really sure where I heard this, but I could have sworn that Colleen Hoover said Without Merit would be a lighter and younger novel than she's published in her last couple of books. But that was really not the case. Younger...yes. Lighter...not really. Only shortly before this book published did I even see an official description for it. And while the description does mention family secrets, there's no hint as to what those secrets may be. But boy are there many.

I don't know that Colleen Hoover can write a book that's simply a love story without having a good bit of drama and darker subjects woven into the story. Without Merit has all of the following: atheism, mental illness, depression, extra marital affairs, gay/bisexual characters, inappropriate sexual situations, suicide, and various other issues. Yet the biggest theme I'd say throughout the entire book is perspective. How we only see a version of the events that happen in someone else's life and we certainly don't know what others are thinking or feeling unless they share those things with us. And how we often assume things about how others think and feel based upon their actions and our own biases. While I was a little overwhelmed with the amount of dysfunction within Merit's family, I did enjoy the message about perspective.

Even though I can't say that I hated Merit as a character, I can't say that I loved her either. She's flawed for sure, regularly making assumptions about her family members based on partial information. She's definitely not my favorite of Colleen Hoover's leading females. But at the same time, she truly was one of the more likeable characters within this family for me.

Sagan was a saint. It was hard to see why he liked Merit, and actually at some point he actually doesn't like Merit that much. But he was involved in Merit's life and family in a way that goes beyond what the average person would do. Yet I liked him most because he inspired Merit to grow and become a better person.

A small annoyance for me was the character names. I felt like they were all a bit too unique to be believable. There's Barnaby, two Victorias, Merit, Honor, Utah, Sage, and Luck. I mean Victoria isn't too odd, but having two of them in addition to the other cast was slightly too much for me.

Because of my background, there were a few things that felt borderline for me. While I was annoyed at Merit's father for being an atheist, I appreciated this being a characteristic that didn't feel pushed upon the reader as he didn't even try to push the same on his children as well. I could easily feel like the characters were a little sacrilegious but Colleen Hoover actually kind of combats that in her writing preemptively. And then of course the gay and bisexual characters were slightly annoying because I'm beginning to feel like she includes this in every single book. Also, I really hate the "just get your virginity over with because there's too much hype" that seems to becoming more and more rampant among the younger generations.

-But that was several years ago and my siblings and I have long since moved past the wrongs our father committed against our mother. Actually, we haven't. Not even slightly.

-I once read a quote that said, "Don't make your presence known. Make your absence felt."

-I also don't trust people who claim for a classic to be their favorite novel. I think they're lying just to sound educated, or they simply haven't read another book beyond high school English requirements.

-If he doesn't like the thought of getting caught, why does he do things he doesn't want people to find out?

-"Sometimes you get stuck with family members that do nothing but make mistakes they never have to apologize or pay for."

-Maybe that's the root of a lot of family issues. It isn't actually the issues people are hung up about for so long. It's that no one has the courage to take the first step in talking about the issues.

-"It annoys me when people try to convince other people that their anger or stress isn't warranted if someone else in the world is worse off than them."

While I read this book within 24 hours and felt hooked and invested into the storyline and Merit and Sagan, looking back on the story, Without Merit might now take the place as my least favorite Colleen Hoover story. It wasn't bad, at all. It's just that the content and characters weren't my preference at all. Even though I connected to the characters having conflict within their family, most of the time I prefer to read as a form of escape and this almost added more stress to my life than help me to escape the stresses I was feeling in my own personal life. Without Merit gets 3.5 Stars. Have you read Without Merit? What did you think? Let me know!