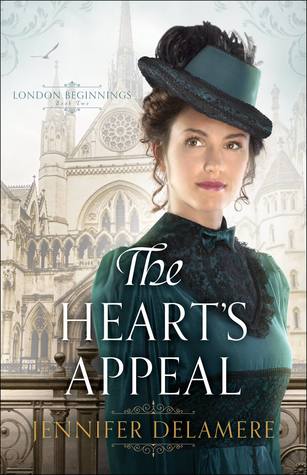 Amazon description--Strong-minded and independent Julia Bernay comes to London to study medicine and become a doctor--a profession that has only just opened up to women. She witnesses a serious accident, and through her quick actions saves the life of an ambitious young barrister named Michael Stephenson.

Coming from a family that long ago lost its money and its respectability, Michael Stephenson has achieved what many would have thought was impossible. Hard work and an aptitude for the law have enabled him to rise above his family's stigma and set him on the path to wealth and recognition. But his well-laid plans are upended when the accident brings Julia into his life.

Michael soon discovers he's met a woman every bit as stubborn and determined to make her mark on the world as he is. Sparks fly--but will they find common ground?

The Heart's Appeal is the second book in this series and my second read by Jennifer Delamere. In both books Jennifer Delamere has included aspects that I just don't find to be typical in the other books that I've read from the time period. In The Captain's Daughter Nate and Rosalyn work in the theater. And in The Heart's Appeal Julia is going to school in hopes of pursuing a career as a doctor. These just aren't entirely typical for the time period, although the culture was in the middle of making some big changes right along this time as well. Either way, I enjoyed reading something a bit different from what is expected of the time.

Julia has a pretty one track mind in the beginning of this book. Her thoughts are medical in nature almost all of the time. Even interactions that she has with complete strangers she was more intrigued with their medical needs than their personal story at times it seemed. Of course, she softens a bit and when I think about it, she did really care about the entire person and their needs not just the physical. It just didn't appear that way at first.

I won't say that Michael was hard to like, yet I've definitely found main characters easier to like than him for sure. His love for his family was one of the biggest attractions for him. Yet that was also one of his biggest weaknesses at the same time. I did appreciate his character growth and the path he took throughout the story.

Personally, I found myself questioning what it was about these two characters that drew them to each other so much in the beginning. Of course there was the life saving incident, but the actual tutoring should have been the biggest chemistry and relationship building part, yet I felt there was more "telling" than "showing" in this area. The two declared their feelings at a time when I wasn't sold. As time passed and the events toward the end of the book were actually more what ended up selling me on the couple but as I said, they'd already declared feelings at that point.

To that point Julia has a very strong faith in God which she doesn't hesitate to share with everyone she meets. I personally respected her for doing this, but I can see where some readers might find this annoying. Michael's opposition to God is something that I was surprised wasn't a bigger problem for Julia when it came to thinking about taking their relationship further.

I found the aspects of feminism within this book refreshing as to the true struggles of women during this time period when compared to the messages and struggles of today. That's all I'll say about that.

The Heart's Appeal was an enjoyable read. I had some questions about the depth of the relationship between Julia and Michael given their religious differences and the times the readers was shown that the two were together. I enjoyed the last portion of the book perhaps the best as things started to make more sense to me with the changes the characters were making within themselves that made their feelings and potential relationship make more sense. The Heart's Appeal gets 3.5 Stars. Have you read The Heart's Appeal? What did you think? Let me know!