When It's Real - Review 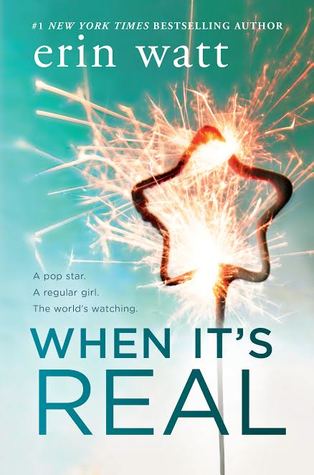 Publication: May 30th 2017 by Harlequin Teen

Goodreads description--Meet Oakley Ford-teen celebrity, renowned pop star, child of famous movie stars, hottie with millions of fangirls… and restless troublemaker. On the surface he has it all, but with his home life disintegrating, his music well suddenly running dry, and the tabloids having a field day over his outrageous exploits, Oakley's team decides it's time for an intervention. The result: an image overhaul, complete with a fake girlfriend meant to show the world he's settled down.

Enter seventeen-year-old Vaughn Bennett-devoted sister, part-time waitress, the definition of "normal." Under ordinary circumstances she'd never have taken this gig, but with her family strapped for cash, she doesn't have much of a choice. And for the money Oakley's team is paying her, she figures she can put up with outlandish Hollywood parties and a team of publicists watching her every move. So what if she thinks Oakley's a shallow, self-centered jerk? It's not like they're going to fall for each other in real life…right?

I started When It's Real because I remember that Holly enjoyed it, and I needed a book to get my out of a reading slump. Often times what I'm looking for in a book to get me out of a slump is a contemporary, fast read that doesn't have to have much depth. In this case, When It's Real didn't necessarily pull me out of my reading slump entirely, but it was interesting enough to pull me out temporarily.

Don't go into When It's Real expecting a book that feels like it could actually happen. Books about celebrities dating normal people aren't usually going to feel too real. And in this case, Oakley and Vaughn fake date first before developing real feelings for each other. So we've got that trope added in as well. But honestly, I didn't mind one bit. I'm not always looking for real when I need something fast and fun. I just want emotion-driven, cheesy even at times, happy love stories.

Because of Oakley's celebrity status, Vaughn and a couple of other people in her real life have to sign non-disclosure agreements. Vaughn's open to this fake relationship because of the big, big bucks it can bring to her family. She's completely unsure of what she wants to do with her life, and her older sister has taken the huge burden of providing financially for their family after both of their parents died in a car accident. Vaughn wants to contribute and this would lighten the load enormously. But back to the non-disclosure, I appreciated this being included because I haven't read this in other celebrity/normal book relationships in the past. It also had me thinking that conflict was going to come from one direction that ended up being different from how I imagined it.

Oakley's coming at this relationship for the PR stunt. The idea is that dating a good, normal girl will clean up his bad boy image and show a particular record producer that Oakley wants to work with that he's serious about his music. And he is serious about his music. He wants to change his sound, if not his image exactly, and he's sure this producer is the right one to help him do it. So he agrees to the PR stunt, but is Vaughn just another person using him?

I liked the side story of Vaughn's sister and Oakley's bodyguard starting to develop some feelings and I would really love to dive in and read their book if Erin Watt ever decided to write it.

When It's Real was exactly what I needed at the time I read it. It was quick. It hooked me. I didn't expect too much of it. I found a relationship that I could root for, but I likely won't remember the details of this one a year or two from now. I still feel like When It's Real deserves 4 Stars. Have you read When It's Real? What did you think? Let me know!