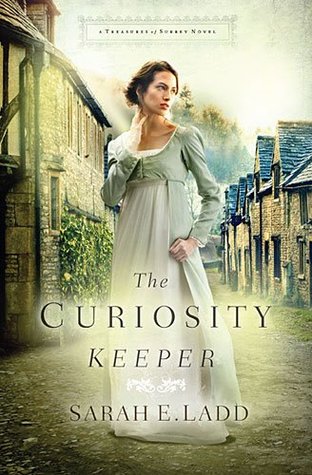 The Curiosity Keeper (Treasures of Surrey, # 1)

Goodreads description--“It is not just a ruby, as you say. It is large as a quail’s egg, still untouched and unpolished. And it is rumored to either bless or curse whomever possesses it.”

Camille Iverness can take care of herself. She’s done so since the day her mother abandoned the family and left Camille to run their shabby curiosity shop on Blinkett Street. But when a violent betrayal leaves her injured with no place to hide, Camille has no choice but to accept help from the mysterious stranger who came to her aid.

Jonathan Gilchrist never wanted to inherit Kettering Hall. As a second son, he was content working as a village apothecary. But when his brother’s death made him heir just as his father’s foolish decisions put the estate at risk, only the sale of a priceless possession—a ruby called the Bevoy—can save the family from ruin. But the gem has disappeared. And all trails lead to Iverness Curiosity Shop—and the beautiful shop girl who may or may not be the answer to his questions.

Curious circumstance throws them together, and an intricate dance of need and suspicion leads the couple from the seedy backwaters of London to the elite neighborhoods of the wealthy to the lush, green Surrey countryside—all in the pursuit of a blood-red gem that collectors will sacrifice anything to possess.

Caught at the intersection of blessings and curses, greed and deceit, two determined souls must unite to protect what they hold dear. But when a passion that shines far brighter than any gem is ignited, each will have to decide how much they are willing to risk for their future, love, and happiness.

I've only read one other book by Sarah E Ladd (The Weaver's Daughter), and I enjoyed it. I wasn't blown away by it, but I did enjoy it. One thing I remember striking me was that it wasn't a book driven by the romance, and now I feel I can say this is likely the case for her writing style because that was certainly the case for The Curiosity Keeper. And while I was interested in the main story and conflict of The Weaver's Daughter, I wasn't as excited about this in The Curiosity Keeper, unfortunately.

Based off the description, I kind of thought Camille and Jonathan would be going on an adventure to hunt down the stolen ruby. That was not the case at all. In fact the entire story around the ruby and the hunt for it just fell flat for me.

Camille herself was fine. She wasn't a highborn lady. And she's been working as the book keeper of her father's shop. She both resourceful and vulnerable. But as her storyline progresses I just kept wondering how things would wrap up in the obvious way that had been set up from the beginning. Yet it just didn't seem like there was any way to get there. And when we finally did, I felt disappointed in the journey.

Jonathan is the second son. He was never intended to inherit so he set out to develop a career as an apothecary--a career he cares about. I could understand his desire not to give up his profession due to the change in circumstances, but I wished he'd seemed to care about the family's situation a little more.

The romance. Oh I just wished the romance had been done better. If this aspect had been on point then it would have made up for the other disappointing factors. Mostly I felt like the relationship between Camille and Jonathan went from zero to seventy-five to one hundred. The relationship didn't seem to be progressing until next thing I know we had arrived leaving me feeling like I didn't know how we got there.