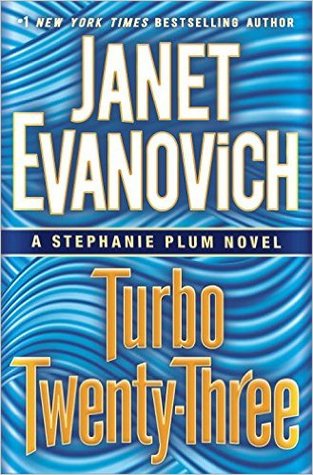 Goodreads description--In the heart of Trenton, N.J., a killer is out to make sure someone gets his just desserts.

Larry Virgil skipped out on his latest court date after he was arrested for hijacking an eighteen-wheeler full of premium bourbon. Fortunately for bounty hunter Stephanie Plum, Larry is just stupid enough to attempt almost the exact same crime again. Only this time he flees the scene, leaving behind a freezer truck loaded with Bogart ice cream and a dead body—frozen solid and covered in chocolate and chopped pecans.

As fate would have it, Stephanie’s mentor and occasional employer, Ranger, needs her to go undercover at the Bogart factory to find out who’s putting their employees on ice and sabotaging the business. It’s going to be hard for Stephanie to keep her hands off all that ice cream, and even harder for her to keep her hands off Ranger. It’s also going to be hard to explain to Trenton’s hottest cop, Joe Morelli, why she is spending late nights with Ranger, late nights with Lula and Randy Briggs—who are naked and afraid—and late nights keeping tabs on Grandma Mazur and her new fella. Stephanie Plum has a lot on her plate, but for a girl who claims to have “virtually no marketable skills,” these are the kinds of sweet assignments she does best.

I got frustrated with the Stephanie Plum series a few books back and took a break from them. They're just so much the same. And while that was the reason I put them down, it also became the exact reason that I picked them back up. I've been in a bit of a reading slump this entire year (book read and review written in late 2018). I don't know if it's motherhood and real life getting in the way or if it's the books that I'm choosing to read. Regardless I wanted to pick up something that I already knew exactly what to expect. And Stephanie Plum fit the bill.

I actually read listened to Tricky Twenty-Two and Turbo Twenty-Three back to back so even though I wanted something I knew what to expect, I really enjoyed Tricky Twenty-Two much better than Turbo Twenty-Three. I think the distance between the amount of time I'd read/listened to one of these books helped me enjoy that one more than this one. There was actual development (it felt like) in the Stephanie/Morelli/Ranger dynamic in 22. Whereas in 23, I felt like we made no progress and if anything took a step backward in the relationship area. And the story-line was more complex and interesting in 22 and more comical in 23.

I will say that I chuckled a little out loud while listening to 23. Lula gets me every time. Although, it has been a LONG while since any of these books made me really laugh.

Because Turbo Twenty-Three felt like a step back in the relationship areas, and the story-line was quite a bit less interesting (or maybe just far-fetched), I'll likely be taking another break from these books--until another time such as I feel the need to read (listen) to something predictable. Turbo Twenty-Three gets 3 Stars. Have you read Turbo Twenty-Three? What did you think? Let me know!