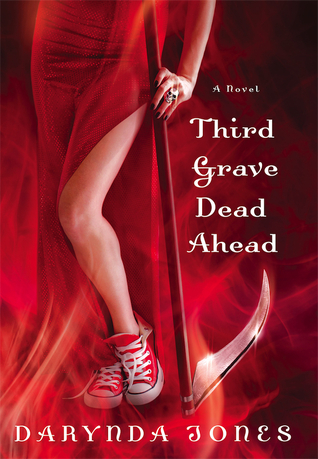 Goodreads description--Paranormal private eye. Grim reaper extraordinaire. Whatever. Charley Davidson is back! And she's drinking copious amounts of caffeine to stay awake because, every time she closes her eyes, she sees him: Reyes Farrow, the part-human, part-supermodel son of Satan. Yes, she did imprison him for all eternity, but come on. How is she supposed to solve a missing persons case, deal with an ego-driven doctor, calm her curmudgeonly dad, and take on a motorcycle gang hellbent on murder when the devil's son just won't give up?

So I'm blowing through this series so far. I finish one book and start the next immediately. I forced myself to review book 2, Second Grave on the Left, before I allowed myself to start this book. However, I jumped right into book 4 without forcing myself to review this one. In some ways I think that was a good thing because I feel that I have a clearer direction on how to review this book, but in other ways sometimes the progress of the overall story can get muddled when I read more than one book too soon without stopping to review. I think it's obvious that I'm enjoying these.

Charley is yet again on the case of a missing wife. She immediately suspects the husband as he seems to pour out feelings of guilt. Things aren't completely what they seem here. Although, as per usual, I was able to predict some aspects of the case. I felt like there was quite a lot of time spent on this case compared to what I'd like to hear more about--Reyes.

Charley FINALLY gets to meet Reyes face to face. She'd seen his physical body before, but both times he was unconscious and heavily injured. Now, he's ragingly PO'd at her for binding his incorporeal self to his physical body. And even though she's tried, she can't seem to unbind him. I do find myself getting frustrated with Reyes and Charley. So many times they don't say what they mean and end up causing more drama between each other than is necessary. They've both hurt each other emotionally and have reasons not to trust each other--Reyes when he was attempting to let his physical body die and Charley when she bound him without permission. Of course, holding someone at knifepoint is also a great reason to distrust. We do make some good advancement in the Reyes storyline that I'd love to talk about, but that would all be spoilers.

The dynamic between Charley's family changes even more as her father all but insists that she get out of the PI business. I mean she has been almost killed multiple times in each book so far. Which reminds me of a point I was going to make. Books where the characters are constantly getting into scrapes that are "too big" especially when they're supposed to be trying to keep things under the radar--like their supernatural abilities--can sometimes be a struggle for me. I mean the authors have to address the frequency of these big events with the characters that aren't in on the big secrets, but it's often too unbelievable how the characters get around this. In the case of this series, Charley needs these life-threatening situations to advance her character, both emotionally and in the area of learning more about what she's capable of. So it's hard to be too upset with them.

-Nothing sucks more than that moment during an argument when you realize you're wrong. --T-shirt

The writing is the same witty and sarcastic that we've come to know and love. Based off the acknowledgment section I'd say this might just be Darynda Jones and not just Charley's character. Charley and Reyes make some progress, but the place where Third Grave Dead Ahead ends spurred me on to pick up book 4 immediately. There was even one place I started to tear up. I didn't cry but I was definitely emotional. I won't tell you anything more besides "Garrett." Third Grave Dead Ahead gets 4 stars. Have you read Third Grave Dead Ahead? What did you think? Let me know!