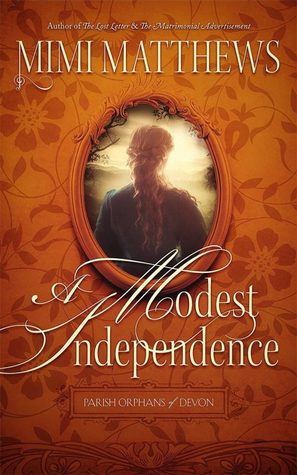 I've read and loved Mimi Matthews in the past. Three books, in fact, all highly rated by me. So I expected no different from this book. Yet I was so disappointed. Thankfully this is a book I can easily put my finger on the issues I had.

Jenny was a struggle for me. Even though I liked her well enough in The Matrimonial Advertisement and I can understand her thought process, that didn't make relating to her any easier for me. Jenny has always been at the mercy of someone else. First her drunken and irresponsible father. Then her callous brothers. Next, she was little more than a servant as Helena's companion and ultimately put out on the street by Helena's uncle. Now that Helena has given Jenny a modest independence she wants to actually be independent and travel on her own. During the process, she hopes to find out what happened to Helena's brother, Giles, who supposedly died in the war. As someone who's biggest dream was to get married and have a family of my own, I struggle when characters are so wholly opposed to marriage. Of course, my dream doesn't have to be everyone else's, but it just makes her character a little less enjoyable for me.

Tom was so impressive in The Matrimonial Advertisement that I found him utterly disappointing in A Modest Independence. He joined Jenny's journey and adventure without actually listening to her desires. And despite Jenny constantly praising him for "always doing the right thing", when it came to Jenny he always made the wrong decision. He constantly chose the path that put her reputation in jeopardy, was selfish, and even though Jenny and Tom never did anything wrong according to today's standards (although let's be honest, there are no real standards when it comes to this in today's culture--whatever makes you happy after all... But that's a different post for a different blog), they constantly put themselves into the wrong circumstances. Sneaking around, lying, and self-serving despite the consequences. These two were no better than Katy Evan's Mr. President. And they're both to blame. Tom just ignored Jenny's repeatedly telling him what she wanted in the long run and as a result, put himself in a situation that resulted in him getting hurt. I have no sympathy for that. I said in my review of Mr. President that I don't enjoy reading about characters that have no backbone and continually choose the wrong path--the selfish path. An occasional mistake is different from a purposeful trek down the wrong path.

The events of A Modest Independence, in general, were so boring to me. Traveling during this time period was excruciatingly slow. There was one train after a boat after a train after a boat after another train and another train and ultimately a cart ride--even if this was historically accurate. All mixed in were hidden dalliances and sneaking around. Making out and gossip. The journey to find out what happened to Giles was so boring and anticlimactic. Not to mention predictable.

And speaking of predictable, the entire book was quite so. Nothing surprised me. And predictability isn't always negative if the process to the end is enjoyable. For me, it was not. Truly I debated DNFing A Modest Independence multiple times. The only reason I kept reading was that I'm so curious to know what has become of Alex Archer. But if the next book in the series follows Tom and Jenny's journey to find Alex, I might have to respectfully pass. I'll wait and see what the description says.

A Modest Independence was a combination of several reading pet peeves for me. A mixture of characters I can't relate to and find hard to support due to a continual pursuit down a path that's doomed due to selfishness yet works out for their benefit. Slow progress. And repetition. None of these are things that I enjoy reading about. Unfortunately, A Modest Independence gets 2 Stars from me. Have you read A Modest Independence? What did you think? Let me know!