Diamond in the Rough - Review 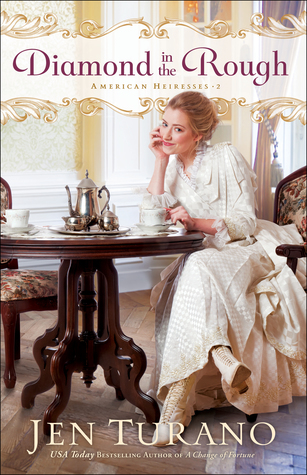 Diamond in the Rough (American Heiresses, # 2)

Goodreads description--To save her family from financial ruin, Miss Poppy Garrison accepts an unusual proposition to participate in the New York social season in exchange for her grandmother settling a family loan that has unexpectedly come due. Ill-equipped to handle the intricacies of mingling within the New York Four Hundred, Poppy becomes embroiled in one hilarious fiasco after another, doomed to suffer a grand societal failure instead of being deemed the diamond of the first water her grandmother longs for her to become.

Reginald Blackburn, second son of a duke, has been forced to travel to America to help his cousin, Charles Wynn, Earl of Lonsdale, find an American heiress to wed in order to shore up his family estate that is in desperate need of funds. Reginald himself has no interest in finding an heiress to marry, but when Poppy's grandmother asks him to give etiquette lessons to Poppy, he swiftly discovers he may be in for much more than he bargained for.

So I finished Diamond in the Rough 2 1/2 weeks ago and am just now sitting down to write my review of it. I hate that I allowed that much time to go by but real life got in the way.

Diamond in the Rough was a little bit of a struggle for me. I'm not well-read in this time period, but I got so tired of seeing the phrase "diamond of the first water." Is that a legit thing from this time period? And if so, it's a dumb and long classification.

Poppy was a bit extra. I mean I just felt like the situations that she got herself into were too far-fetched and unrealistic. If nothing else, the frequency of these unrealistic events made them more unbelievable. A little less frequency and I might have been able to buy what Jen Turano was selling.

Reginald was okay. My biggest frustrations with him were surrounding his predictable conflict.

Which leads me to my next point. Despite the unrealistic nature of many of the events, the conflict was mostly predictable except the very last bit.