Echoes Between Us - Review 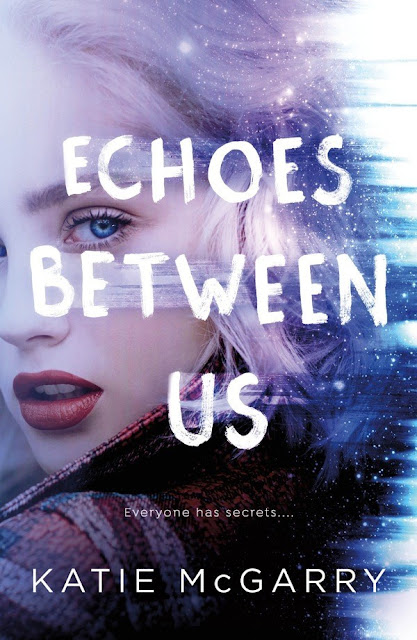 Goodreads description--Echoes Between Us is bestselling author Katie McGarry’s breakout teen contemporary novel about a girl with everything to lose and the boy who will do anything to save her.

Veronica sees ghosts. More specifically, her mother's ghost. The afterimages of blinding migraines caused by the brain tumor that keeps her on the fringes and consumes her whole life haunt her, even as she wonders if it's something more...

Golden boy Sawyer is handsome and popular, a state champion swimmer, but his adrenaline addiction draws him to Veronica.

A girl with nothing to live for and a boy with everything to lose--can they conquer their demons together?

Katie McGarry has really been diving into the deep end. As in, emotionally deep, complex, and sometimes draining topics. Honestly, this isn't new. I mean Pushing the Limits was about some heavy subjects too. So this isn't new territory for her at all. As a matter of fact, now that I think about it, a lot of her books have some heavy subject matter.

The description tells you that Veronica has a brain tumor and that Sawyer is an adrenaline junkie. So thankfully none of that is a spoiler. My time watching medical dramas immediately had me thinking brain tumor for Veronica (hello Izzie and Denny from Grey's). Veronica deep down knows that being able to see her dead mother likely means her tumor has grown. She has to come to terms with her fear--of dying, but also--of dying a slow, drawn-out, painful death. But she also has to come to terms with the cost of not fighting the tumor and what that would really mean for her life.

Sawyer is the true hero of this story. He's been taking care of his family since his parents divorced when he was 11. This includes picking up the slack from his mom's long, late hours and traveling. He's pretty much become the main caregiver for his 7-year-old sister. His Dad hasn't been in the picture, but he has recently reappeared in an attempt to mend fences. Sawyer deals with the stress of his life by jumping off cliffs. Literally. But he realizes that he has a problem and he seeks help for his adrenaline addiction in the only place he knows might help. And he comes up with more help and more problems than he even realized he had. But he's making the steps to fix what needs fixing. All the kudos go to him for this, and I love how Katie McGarry discussed the problems of enabling in this book. I also love how Sawyer saw that he could have easily ended up enabling Veronica which would have actually damaged their fledgling relationship.

I wasn't sure if Katie McGarry was trying to write a fantasy with the inclusion of the ghosts. We know Veronica is likely seeing hallucinations due to her tumor, but what about Lucy or Gloria? I will say that this is the 2nd book she's written in succession that includes a psychic of some form. I hope this is steered away from in future books.

I struggled a little with Sylvia and how I never felt like she really apologized to Veronica for making fun of her in the past. Maybe I skimmed over that part, but I don't remember skimming any of Echoes Between Us. While I don't love the inclusion of Sylvia being gay, I did feel like that fit into the story much more than so many other books I've read that seem to throw things in for diversity's sake alone. I didn't particularly enjoy the way religion was pitted against this in the story. (Paraphrasing but the vibe was that all Christians hate gay people. But God loves them and we'll be surprised to see them in heaven. I personally don't hate gay people--those that I know personally, nor those I have not met. Yet that doesn't mean that I agree with it. And I will leave it to Scripture for anyone to determine how God feels about individuals--all of whom are sinners (myself included)--as well as who He tells us will be found in heaven. I encourage you to read your Bible for yourself and not let others or your emotions tell you what God Himself can tell you about who He is and what He approves and disapproves of.)

Echoes Between Us was not my favorite Katie McGarry book, but I did enjoy it and it was quite deep and complex. I enjoyed wondering if she was toying with fantasy or if she would write a logical explanation for all of the ghost pieces of the story. I was so proud of Sawyer for taking steps to help himself and those he loved. Veronica was equally captivating and I enjoyed her journey. Echoes Between Us gets 4 Stars. Have you read Echoes Between Us? What did you think? Let me know!