The Map from Here to There - Review 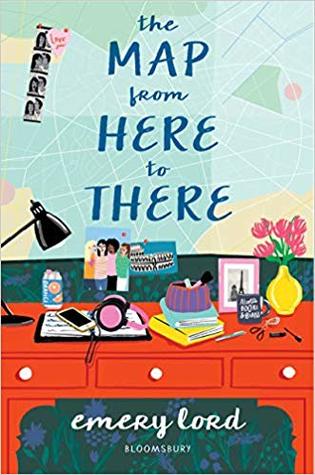 Publication: January 7th 2020 by Bloomsbury YA

Goodreads description--Acclaimed author Emery Lord crafts a gorgeous story of friendship and identity, daring to ask: What happens after happily ever after?

It's senior year, and Paige Hancock is finally living her best life. She has a fun summer job, great friends, and a super charming boyfriend who totally gets her. But senior year also means big decisions. Weighing "the rest of her life," Paige feels her anxiety begin to pervade every decision she makes. Everything is exactly how she always wanted it to be--how can she leave it all behind next year? In her head, she knows there is so much more to experience after high school. But in her heart, is it so terrible to want everything to stay the same forever?

Guys... I'm torn. I really enjoyed The Start of Me and You. I loved Paige and Max. I loved Paige's friend group. I loved the tough things that Paige had to work through. Unlike most fans, I didn't have to wait for this book to publish since I don't think a sequel was originally planned, and I was able to just jump right into this book.

Here are my issues: this book felt much more political than the previous. I almost felt like we had a checklist going for political correctness (which would be fitting for Paige's list-making character). Paige's dad writes political pieces in his journalism column, although thank heavens we aren't subjected to reading them. We now have two gay couples--one female and one male. We have the feminist, again not subjected to much rhetoric but still present. We have a character intent on sex education reform, mostly because she has a feminine health issue (most likely PCOS). And we have an intense focus on the absurdity of planning college/after high school plans around people we strongly care about.

The beginning and very end felt like the true story of The Map from Here to There was actually about friendship. And while I really loved this group of friends, my preferences always revolve around romantic relationships. That's not to say that there's anything wrong with stories about strong friendships. I love those too. But I guess I just expected it to focus on Paige and Max.

Don't get me wrong, Paige and Max dominated the middle of the story, but mostly in the conflict areas and not in the happy-we-are-so-in-love kind of way. It totally makes sense that they might struggle with where their relationship is heading after high school. It wouldn't be smart to plan their futures around each other, especially considering that Paige's dream job is leading her toward one coast or the other. New York or LA. Despite Max being the bigger nerd between the two of them, he didn't seem to apply to any big-name schools until pressured into it. I struggled with how I felt about their conflict and how they approached dealing with it.

Paige herself was a little bit of a struggle for me as well. I've only really dealt with anxiety that I didn't feel in control of for one short period in my life when I was on a medication that didn't seem to be the right fit for me. I did feel like I was out of control and weak compared to what I saw myself being capable of handling. So I feel torn because that's not something I have dealt with outside of the period I was on that medication. So in some ways, I could relate to her anxiety and in other ways, I couldn't. I honestly felt like she'd been through worse trials and come out on the other side stronger than what she was facing in this book. Granted, anxiety isn't always logical. So I guess it's realistic.

From a personal level, I get frustrated with characters that are so against planning their futures around people they care about. Certainly, there are plenty of circumstances where one would regret following someone versus following their own dreams. But couldn't the same be said about the opposite? Couldn't one follow their career dreams and end up regretting leaving those they love behind? Because in the end, what is life without people we love to share it with? I just mean that it isn't so irresponsible to consider those we love when we are making giant life choices that will affect our futures.

Email ThisBlogThis!Share to TwitterShare to FacebookShare to Pinterest
Labels: 3.5 Stars, Contemporary, Emery Lord, The Map from Here to There, The Start of Me and You, Young Adult