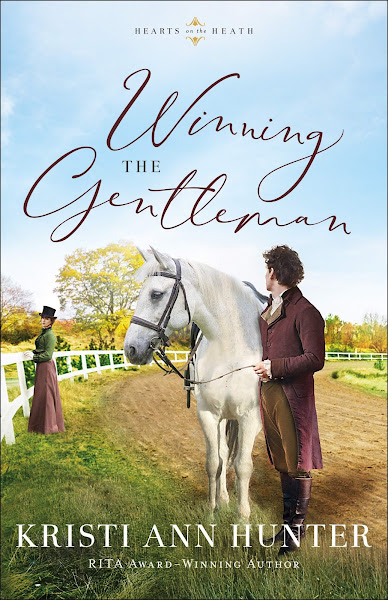 Winning the Gentleman (Hearts on the Heath, # 2)

Goodreads description--Aaron Whitworth hasn't had control over most aspects of his life, but he's always taken pride in being an honorable businessman and better-than-average horseman. When both of those claims are threatened, he makes the desperate decision to hire the horse trainer of a traveling circus as a temporary jockey for his racehorses.

Sophia Fitzroy knows that most horsemen don't take her seriously because she's a woman, but she can't pass up the opportunity to get away from the tumultuous world of travel and performing. As she fights for the right to do the work she was hired for, she learns the fight for Aaron's guarded heart might be an even more worthwhile challenge.

As secrets come to light and past vulnerabilities are confronted, will Aaron and Sophia sacrifice their former dreams and forge a new one together--against all odds?

I remember first meeting Aaron in the Haven Manor series. I remember wishing even back then for Aaron to have his own book, yet by the time we made it to his story, I could barely remember his involvement in that series. Of course, he was a prominent character in the prior book of this series, Hearts on the Heath as he is the caretaker and manager of Hudson's stables. He also manages his friend Oliver's stables. So I was familiar with him and most of his backstory before starting Winning the Gentleman. What wasn't known was his emotions or how he processes information and experiences.

Sophia was a complete unknown. She and her brother lost their parents a few years back. Her father was a horse trainer, and all Sophia has ever wanted to do is to train others the way her father taught her. Unfortunately, she and her brother were too young to take over the riding school when he passed. They ended up with jobs in the traveling circus when her brother was injured and could no longer ride. Sophia tricks Aaron into hiring her as a jockey for Oliver's racehorses, thinking he's hiring her brother.

I loved how Aaron was too honorable to back out of his deal with Sophia when the truth was known. I loved how he had to work through his history with his father. I loved the budding relationship he has with his half-brother (who I would love to read more about). I loved Sophia's determination to prove herself and do what no other woman (at that time) had done or would consider doing. And of course, I enjoyed the building relationship between Aaron and Sophia.

Unfortunately, this is one of those times when I let a bit too much time go by between reading the book and reviewing it. So I know I had much more put-together thoughts concerning the storyline and conflict. But this is the life of a mom of 3 kiddos 5 and under. Thankfully, I highlighted a good bit so that sparked my memory, and I can include some of my favorite quotes.

-If there was one thing he’d learned in his years on the edge of society, it was that the appearance of confidence was almost as good as possessing it.

-He’d thought he and the Almighty had a decent agreement. Aaron didn’t ask God for miracles, and the Deity didn’t make Aaron’s life any more difficult than it already was. Somewhere along the way, that deal had faltered.

-Next time he saw Kit, he was definitely going to frown at her.

You really need the context for that one, but it made me laugh so I had to include it.

-What did it mean when you got everything you wanted but you still weren’t happy?

Winning the Gentleman was a fast, enjoyable read. It has been one of the few books that have kept my attention since having Baby Boy. I loved the characters' personal challenges to overcome. Aaron has to figure out what he really thinks of himself and what he deserves. Sophia has to battle the cultural norms for what a woman's place is, and I loved how determined she was to see her dreams come true. Winning the Gentleman gets 3.5 Stars. Have you read Winning the Gentleman? What did you think? Let me know!