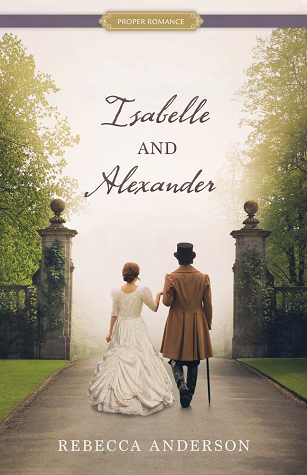 Isabelle Rackham knows she will not marry for love. Though arranged marriages have fallen out of fashion, hers has been settled for some time to combine the upper-middle-class wealth of her father’s coal mines with Alexander Osgood’s prospering Northern country textile mills. Though not a man prone to romantic gestures, Alexander is well-known as an eligible bachelor. His good looks have turned more than one head, so Isabelle is content to think of herself as Alexander’s wife.

However, her marriage is not what she expected. Northern England is nothing like her home farther west in the lake country. Cold, dreary, and dark, the soot from the textile mills creates a gray hue that seems to cling to everything in the city of Manchester. Alexander is distant and aloof, preferring to spend his time at the mill rather than with her at home. Their few conversations are brief, polite, and lacking any emotion, leaving Isabelle lonely and desperately homesick.

Sensing his wife’s unhappiness, Alexander suggests a trip to his country estate. Isabelle hopes this will be an opportunity to get to know her new husband without the distractions of his business. But the change of scenery doesn’t bring them any closer. While riding together on horses, Alexander is thrown from his and becomes paralyzed. Tragedy or destiny? The help and care that Alexander now needs is Isabelle’s opportunity to forge a connection and create a deep and romantic love where nothing else could.

Let's see...what do I want to say about Isabelle and Alexander ? I read this book in about 24 hours. I didn't want to put it down. And thankfully I didn't have to put it down often since I had a chunk of time to read.

Isabelle and Alexander get married as typical couples often did in that time....as a business arrangement. He would provide for her and she would be socially acceptable for him. However, the two struggle to find themselves in their marriage in the beginning. Isabelle often feels alone and neglected. Alexander apparently has a hard time opening up to new people. The two finally seem to be making some incremental progress when Alexander has a horse accident that causes a spinal injury.

Alexander and Isabelle both go through the typical emotions you might expect of someone who has suffered a traumatic injury and someone else who has become a caregiver. Alexander is struggling with his new reality. He feels weak and humiliated. He's unable to move about in his mill like he once did. He feels like he's a burden. And he knows his new wife didn't exactly sign up for this kind of life. Isabelle just wants to help. She wants to ease Alexander's burdens however she can. She rejoices in even the smallest amount of sensation and movement that returns to him even if he can't always appreciate those small victories. She struggles though because she's in a new place with very few friends. Her husband is distant. I give her major props for working so incredibly hard. She wasn't just working to help Alexander recover, she was also working and fighting for their marriage--unable to be satisfied with the impersonal relationship they began with.

-"I simply wish so regularly, so constantly that I could do anything correctly. I thank you for thinking I am doing well."