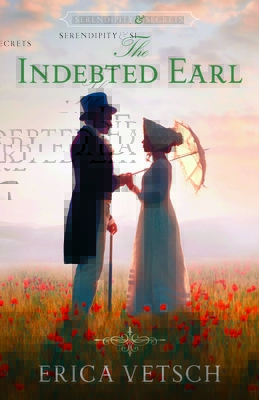 Goodreads description--Captain Charles Malvern owes a great debt to the man who saved his life--especially since Major Richardson lost his own life in the process. The best way to honor that hero's dying wish is for Malvern to escort the man's grieving fiance and mother safely to a new cottage home by the sea. But along the way, he learns of another obligation that has fallen on his shoulders: his uncle has died and the captain is now the Earl of Rothwell.

Sophie was introduced as Marcus's sister in The Gentleman Spy. She was so exuberant, and I liked her instantly. I didn't really expect to get her story because she was already engaged and in love and because she was only present in one scene. But I was excited to find out she would be the main female character of The Indebted Earl. However, Sophie's exuberance has dimmed. She is much changed due to her fiance's death. She's become somber in the wake of her tragedy and continuing to help her fiance's mother who is in the early stages of dementia or Alzheimer's.

Charles was Rich's Captain and friend. They were injured at the same time and side by side in the hospital in Portugal. While Charles healed, Rich did not. And on his death bed, Rich asked Charles to take care of Sophie. Charles has been enamored by Sophie through the letters she sent to Rich before and after his injury. But he finds that he admires her even more in person.

Charles and Sophie agree to a marriage of convenience, a business arrangement really. And while I've read marriage of convenience books in the past, Charles and Sophie's marriage really seemed to lack much emotion. While Charles has always admired her and had affection for her from the start of their marriage, Sophie's feelings were slower to develop. She didn't even have the apprehension that most other brides in marriage-of-convenience situations had. I think that is what was really lacking for me. Most brides in these situations have hope of developing a good relationship with their husbands over time, Sophie went into the marriage thankful for the lack of emotion between them. It was a slow-developing relationship and while I read the book quickly, the story wasn't fully driven by the potential of the romance as I prefer.

-No one had told her that grief was so exhausting. Her body felt battered and her mind drained before she even got out of bed in the morning.

-"Duties are not burdens when they are performed out of love.”

I enjoyed The Indebted Earl . It wasn't a typical love story. I still enjoyed it even if I wasn't driven to a frenzy to find out what was going to happen next. I actually enjoyed the mystery where I sometimes find that aspect can get in the way of my feelings toward the book. I loved the orphan girls that Charles and Sophie took in. Each girl had a lot of personality and I wouldn't mind reading about each one in time. Although, I think Cilla might be the leading lady of the next story. The Indebted Earl gets 3.5 Stars. Have you read The Indebted Earl ? What did you think? Let me know!