Hooked on You - Review 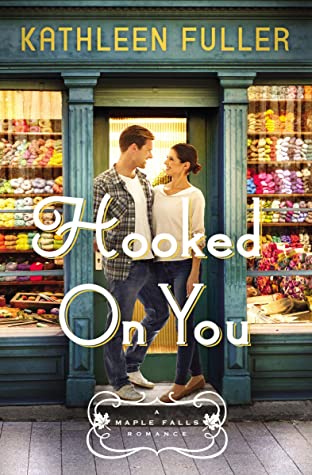 Goodreads description--When her grandmother injures herself sliding into third base, Riley McAllister must return to her small hometown to help run the family yarn store in this sweet, lighthearted romantic comedy.

Riley McAllister left the small Arkansas town of Maple Falls after graduating high school, hoping to make it big in New York as a mixed media artist. She’s still pursuing her dream when her grandmother begs her to come home and help her manage the store while she recovers from a broken leg she got after sliding into third base during a church softball game (she was safe, by the way). Riley agrees, planning to convince her grandmother to sell the old shop and retire so Riley can get back to the big city. New York is where she belongs, not some hick town that doesn’t even have a decent coffee shop.

Hayden Price’s life hasn’t turned out as he expected either. He still works in the hardware store his family has owned for several generations after his chance to make it out of Maple Falls ended when he blew out his pitching arm during a minor league game. Stuck with debt from college and a broken engagement, he decides to make the best of things when he comes back to Maple Falls and puts together the town’s first church softball team--with him as coach, of course.

Riley and Hayden went to high school together but ran in totally different circles. In fact, it’s safe to say they hated each other. Will that change when the softball team unexpectedly brings them together? Or will the pain and disappointment of their past failures keep them from discovering love in Maple Falls?

Since becoming a mother it has become increasingly important for books to hook me early in the story. I have limited time to read, and so I want to read something that I'm interested in and so it is best to be interested sooner rather than later. Hooked On You was not a book that hooked me early. In fact, I had to push myself to keep reading this one. And finally, around the 40% mark, I felt invested enough to want to keep reading.

I didn't quite understand Riley's reluctance to return to Mercy Falls. I realize that she never felt like she fit in there, but it was also the first place she had any stability in her life.

Hooked On You was written from at least 3 POVs (Riley, Hayden, and Mimi). While I do enjoy dual narration books, I find that adding in more characters can lessen my enjoyment. Mimi was necessary because she has a perspective on a few events that neither Riley nor Hayden personally witnesses, but I still found myself kind of dreading when Mimi would narrate.

Riley and Hayden's relationship progressed very fast. Too fast for me to find realistic. I was fine at first and they actually seemed to be taking things slowly, and then WHAM...fast forward. I guess I just need to say that the writing in this way felt a little unpolished. I specifically remember thinking that I was proud of the characters for taking their time until well they decided not to take their time.

The conflict felt real more so for Mimi than for Riley. I don't want to spoil things but some of the big conflict felt like "what's the big deal about that?" But then I suppose the dishonesty and secrets are the bigger issue to overcome.

All in all, Hooked On You was slow to get started for me. I did eventually get invested, but I felt like the conflict was a bit forced and the relationship skipped several steps. In the end, I feel like Hooked On You gets 3 Stars. I am intrigued by some of the side characters, but I don't know that the writing is enough to drive me to read any other books in this series. Have you read Hooked On You? What did you think? Let me know!