The Heart of a Cowboy - Review 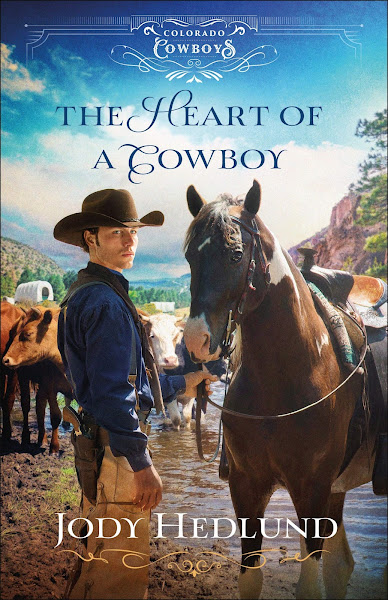 The Heart of a Cowboy (Colorado Cowboys, # 2)

Goodreads description--Brilliant scientist Linnea Newberry is on the adventure of a lifetime, traveling the Santa Fe Trail with her grandfather, Dr. Powell, on a botanical expedition to Colorado Territory. She longs to be taken seriously by the other team members, but at every calamity she faces, her grandfather threatens to send her home.

After watching his ma suffer and die in childbirth, Flynn McQuaid has sworn off women and marriage forever. Headed west to start a new life, he has his hands full not only taking care of his younger siblings but also delivering cattle to his brother. He doesn't need more complications.

When Flynn rescues Linnea from drowning during a river crossing, Dr. Powell promptly hires Flynn--unbeknownst to Linnea--to act as her bodyguard for the rest of the trip. As Flynn fights against the many dangers of the trail, he soon finds himself in the greatest danger of all--falling for a woman he's determined not to love.

I've read a couple of books about wagon trails to west America in the last year or so. They're often full of pain and suffering. And sure, maybe every good story needs some pain and suffering. But I don't always like to go into a story expecting it. I like to be as surprised by it as the characters are. Anyway, I said that to say that I wasn't stoked to see The Heart of the Cowboy focus so much on the journey to Colorado. But it makes sense. Wyatt needs more cows added to his herd. Flynn, Dylan, and Ivy need a reason and way to travel to Colorado. And so it just makes sense.

Flynn was easy to love with his struggles. He has seen so much. His dad died, and his mom remarried an abusive man who stole their family farm out from under them. Then his mom has struggled from one stillbirth to another. Flynn decides that he won't ever put a woman through childbirth. He also couldn't prevent his younger brother, Brody, from heading off to enlist in the war. And he and Wyatt have always had tension and disagreements. So he's looking forward to starting a new life in Colorado, but also, he needs to distance himself from his past. I could also relate to his struggles to parent Dylan and Ivy. They both need a parent...or better yet, two parents, but the harder he tries the more they rebel or resent him for it.

Linnea. Bless her. She's a magnet for life threatening situations. She's an educated botanist. But she's rarely taken seriously because she's a woman. She convinced her grandfather to let her join on his expedition to catalog the plants on their journey to Colorado and back for a manual he was compiling with a group of other scientists. No matter how hard she worked, her contributions weren't appreciated by the group. And despite everything stacked against her, Linnea was just a sweet character. She was also easy to love.

Desire was rampant between these two. And I don't often find that Christian authors touch on this too frequently. So it was nice to see these two have to struggle with this. The tension between them was glorious. And it felt like the relationship was the driving force of the story. I always prefer books where this is the case.

I was happy to get to know Wyatt and Flynn's siblings a little bit through this story. Dylan is quite the ladies man, so I can see his struggles coming from a mile away. Ivy is a firecracker. And I can't wait for her story. Brody's book will come next. And we didn't get much about him except a chapter at the end of The Heart of a Cowboy to set up his book.

Also one quick note, I liked how the Native Americans weren't the bad guys during this wagon train tale as they so often are.

-“I could never be like you.”“And you don’t have to be. You just have to be the truest form of you.”

-Did a man need to cast aside all chivalry in order to respect a woman’s worth? Or was it possible for men to regard women with high esteem while also valuing their intelligence?

-The God who took care of the grass and the flowers and the trees had taken care of her just as He’d promised.