To Marry an Earl - Review 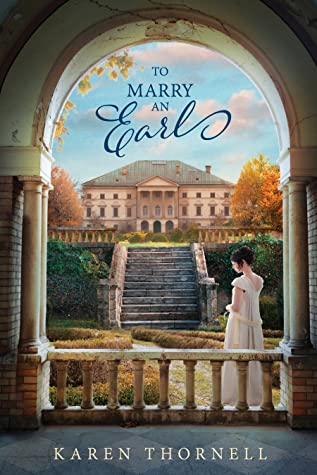 To Marry an Earl

Goodreads description--Katherine Cartwright knows through bitter experience that true love is fiction and trust should not be bestowed easily. Now, after two unsuccessful London Seasons, her atrocious father has decided to marry her off to the highest bidder to pay for his gambling debts, ridding himself of the daughter he never wanted. A profitable deal is struck, and Kate is packed off to the home of her betrothed, an earl she has never met. Or so she believes.

When James Fenwick, the new Earl of Bowcott, learns that the girl he’s loved since childhood is being sold off like chattel, he’s determined to step in and save her. He makes an offer her father cannot refuse and insists on a proper engagement. But when Kate meets James again, her old friend cannot bring himself to admit it is him whom she is to marry. Soon, an intricate charade and a past that cannot be escaped jeopardize James’s chance at rekindling their friendship, to say nothing of winning Kate’s heart. Can love truly conquer all, or was this a match doomed from the start?

Kate's father is borderline abusive. At least verbally. He has never shown much interest in her except to berate her. And her mother hasn't stood up to him on her behalf. So Kate has often felt alone and unimportant. She's only ever had one friend, and he moved away three years ago with no word or even a goodbye. Her father has accumulated debts so high and Kate has been unwilling to marry in her prior Seasons that her father has become desperate enough to nearly offer her to the highest bidder.

James had begun to feel more for Kate than friendship when his family had to move unexpectedly. When he hears of the kind of men offering for Kate's hand and her father's desperation to accept whoever can provide him the most beneficial offer, James knows he has to step in. Thankfully, his new earldom has offered him the means and anonymity to be able to do so.

I was really unsure how Karen Thornell was going to work out this ruse of James keeping his identity from Kate. This was actually revealed in the early portion of the book, which made sense because I don't see how it could have gone on any longer than it did.

Kate has trust issues. No one has ever taken up for her. And everyone she's been close to has taken advantage of her, sat by while someone else did, or left. She has to work through her feelings about James leaving and his lies. Kate's struggles with trust were so easy for me to relate to that I almost got teary during one section.

I wasn't expecting a mystery. The description didn't hint at one. In some ways, I felt like the culprit was obvious. In other ways, I kept questioning myself and every single character--even the ones who should have been obvious to have no part in the scheme.

-Father may control her life, but she controlled her perspective on it...

-He would never tire of hearing her say his name. It was likely a rather unmanly feeling, really, to be brought to one’s knees by the sound of one’s own name.

-“I am perfectly capable of having more than one friend, James. You need not enter into a rivalry with my horse.”

To Marry an Earl was enjoyable. I was hooked easily, but I also found myself wanting to put it down when Karen Thornell got to the true climax of the story. It was time for bed, and I just couldnt possibly read that section where the character does something stupid right before bed. I also wasn't expecting a mystery. Typically, I shy away from those. To Marry an Earl gets 3.5 Stars. I'm curious to see if any of the side characters will end up with stories of their own. Have you read To Marry an Earl? What did you think? Let me know!