All Things Halloween Review - A Fate of Wrath & Flame 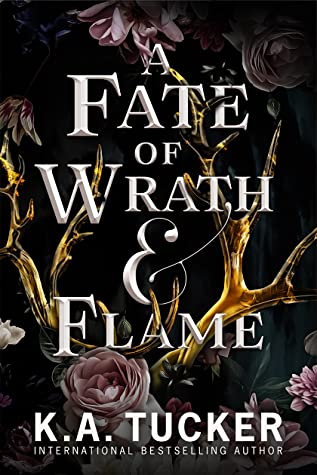 Goodreads description--She would know the world of vengeful gods and monsters, and the lengths one would go for love. And nothing would ever be the same for her again.

Gifted thief Romeria has flourished from her days as a street kid pilfering wallets to survive. Now she thrives, stealing jewels from the rich under the involuntary employ of New York City’s most notorious crime boss. But when an enigmatic woman secures her services at swordpoint, Romeria is plunged into a startling realm of opposing thrones, warring elven, and elemental magic she cannot begin to fathom.

Her quest is straightforward: Steal a stone from Islor’s sacred garden without anyone discovering her true identity, which would earn her certain death. But the identity she has inexplicably assumed is that of the captured Ybarisan princess—an enemy to Islor after she poisoned their beloved king and queen on the day she was to marry the prince.

Her betrothed, the newly crowned King Zander, detests her with every grain of his handsome being. Fortunately for Romeria, she is more valuable to him alive than dead. Zander gives her a choice: life in a cell, or an acquittal of all charges in exchange for her help in exposing the growing plot against him.

Romeria sees no other option and embraces the tricky role of smitten queen-to-be until she can escape, a ruse that brings her far closer to the king than she anticipated and threatens more than her safety. As she digs deeper into this sacred garden and the ancient feud between Ybaris and Islor, she discovers monstrous truths that could spell ruin for all.

I have been a fan of KA Tucker for a while. When I saw she wrote a fantasy series, I knew I wanted to read it. However, I've been in a historical fiction mood for a couple of years. I still read fantasy but just not as frequently. I'm glad I finally picked up A Fate of Wrath & Flame because I devoured it.

The beginning was slow for me. Necessary, but slow. The reader needs to understand Romy's life before getting pulled into this fantasy world. But that made me struggle a little because I want to get hooked into a story quickly. Almost as soon as Remy wakes up in the fantasy world, I was hooked like I wanted to be.

A Fate of Wrath & Flame reminded me of Jennifer L Armentrout's Blood and Ash series. The two don't mimic storylines, but you have a twist on typical vampires. They both feel medieval with castles and castes systems, courts and royalty. There's magic because, well, it's fantasy. And there's a lowly girl who finds out that she's not who she's always thought she was. A prince...in one story, the prince is about to be king, and in the other story, the prince becomes king right before we meet him. There are several similarities and a similar feel. Plus an enemy to lover romance in both.

I felt sorry for Romy because she is slammed into this world that she knows nothing about. And she has to pretend to be someone quite hated by pretty much everyone around her. She does come up with an excuse, amnesia, that helps others begin to see that she truly has no recollection of facts she should know if she were lying about amnesia. And she finds a few allies even though those are tenuous at best.

Zander was easy to feel bad for as well. His parents were murdered on the day he was supposed to marry the woman he was in love with...by that very same woman. He is angry and hurt. And he learns that much is not what it appeared to have been nor what appears to be coming. Some of his closest advisors don't understand his choice to keep Romeria alive or close to his side. They believe he's under some sort of spell which makes him a king to be questioned. Most of all, he wants to figure out the plot against his kingdom because he's not the only one in danger.

I ended A Fate of Wrath and Flame and immediately jumped into the second book. I told myself I wouldn't forget where one stopped and the second began, but I was lying to myself to think that I could separate the two books completely when it came time to write my reviews. I get so frustrated with myself when this happens. I remember that Zander and Romy weren't in a good place when book 1 ended and book 2 began. So you've got that conflict spurring you on to keep reading.

-"I am a king. For every enemy I face, there are ten I cannot name, but they are always there, waiting for an opening." "Which one do you focus on?" "The One that is most dangerous at that given moment."

-"Welcome to the throne. Threats come from every direction, and they do not wait in line for their turn."

-"Tonight did not satisfy your curiosity?" "No, actually. I've been left completely unsatisfied," I counter...

-...I'm used to being abandoned by those closest to me, and I'm not about to beg him to stay.

A Fate of Wrath & Flame was so good. The beginning was slow, but once I got hooked, I was in. I even jumped pretty quickly to purchase book 2 when I often wait because I had to know what was going to happen next. The intrigue about the state of Islor and the plots against the kingdom and against Zander had me trying to figure everything out. Romeria and Zander had a delicious hate to love relationship that, of course, wasn't in a good place at the end of book 1. I can't wait to dive deeper into the series. I've already read book 2, so I'm dying for book 3, which hasn't be released yet. If you enjoyed Jennifer L Armentrout's Blood and Ash series, I think you will like this as well because they are similar without being repeats of each other. And I hate that I waited so long to read this book, except that doing so allowed me to go straight into book 2. A Fate of Wrath & Flame gets 4.5 Stars. Have you read A Fate of Wrath & Flame? What did you think? Let me know!