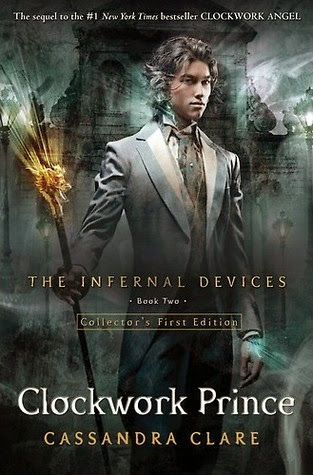 Goodreads description--In the magical underworld of Victorian London, Tessa Gray has at last found safety with the Shadowhunters. But that safety proves fleeting when rogue forces in the Clave plot to see her protector, Charlotte, replaced as head of the Institute. If Charlotte loses her position, Tessa will be out on the street—and easy prey for the mysterious Magister, who wants to use Tessa’s powers for his own dark ends.

With the help of the handsome, self-destructive Will and the fiercely devoted Jem, Tessa discovers that the Magister’s war on the Shadowhunters is deeply personal. He blames them for a long-ago tragedy that shattered his life. To unravel the secrets of the past, the trio journeys from mist-shrouded Yorkshire to a manor house that holds untold horrors, from the slums of London to an enchanted ballroom where Tessa discovers that the truth of her parentage is more sinister than she had imagined. When they encounter a clockwork demon bearing a warning for Will, they realize that the Magister himself knows their every move—and that one of their own has betrayed them.

Tessa finds her heart drawn more and more to Jem, but her longing for Will, despite his dark moods, continues to unsettle her. But something is changing in Will—the wall he has built around himself is crumbling. Could finding the Magister free Will from his secrets and give Tessa the answers about who she is and what she was born to do?

Ah….That was a sigh. I know you can’t hear it, but that’s what it was. I’ve needed this book. Yes, I’ve read books recently that I couldn’t put down, some because I had the opportunity to read without much interruption and some because they’ve just been that good, but I’ll say it again…I needed this book. Clockwork Prince has been one of those books that I absolutely HAD to know what was going to happen from the very beginning. Of course Clockwork Angel ended in such a way that piqued my curiosity and I was fully prepared to be enthralled, and I was, while at the same time fully prepared to be disappointed, which I was not.

Before beginning Clockwork Prince I was decidedly frustrated. The City of Fallen Angels left me very unsatisfied and all I could see from Clockwork Angel was repeating patterns of story arc and that was my perception and expectation with starting Clockwork Prince. It was also the exact reason why I didn’t rush to purchase it on the release date and even waited three months after receiving the book (at Christmas) to pick it up. However, my faith in Cassie Clare and her writing has been restored. And thank God for that! I feel, even though Cassandra Clare will probably never read this post, that I should apologize for my lack of faith as I had to do in my review of Maggie Stiefvater's Linger.

Yes there are similarities between the overall arc of The Mortal Instruments and what I’ve seen so far from The Infernal Devices, but it isn’t the same story as I might have once feared. Yes, Jace and Will bear a lot of resemblance in demeanor and history (Jace fearing that to love means to kill, Will fearing to be loved is to kill) despite the fact that they are essentially related. And Clary and Tessa both falling for the boy who treats them badly. Not to mention, it take three books each time to find resolution with the villain (and the romance). I have to admit, that is still one of my least favorite things about these books compared to some other series that have a new war to fight and a new villain to defeat with every book in the series.

But all of that can’t compete with the sheer frustration I felt every time I had to put this book down (which is a good thing, one of the best determinants in my opinion of a good book). I had to force myself to go to bed, to stop reading at work when breaks and lunches were over. This book got under my skin and it drove me crazy with wanting. There’s plenty of “moments”—you know the ones, the meadow scene in Twilight, when Edward leaves in New Moon, the bed and proposal scenes from Eclipse, when Rose and Dimitri kiss for the first time in Vampire Academy, the cabin scene from Shadow Kiss, the part where Rose asks ghost Mason if Dimitri is Stirgoi also in Shadow Kiss, where Elias tackles Gabry after she’s killed Daniel and covered in his blood in The Dead Tossed Waves, when Darcy proposes to Elizabeth the first time in Pride and Prejudice, Captain Wentworth's letter to Anne in Persuasion, I could keep going—that kept me wanting for more and more and more. Moments that make you scream “NO!!!!!!!!!” as well as moments that make you cry “YES!!!!!!!!!!!!!!” This is the book I’ve been missing.

Cassandra Clare’s Clockwork Prince, 5 stars. Read it. I will probably be jumping on Clockwork Princess as soon as it releases instead of waiting this time...though there's still no release date for that at this point.

P.S. I highly suggest reading The Mortal Instruments series and The Infernal Devices series in order of their release dates. Meaning read in this order: City of Bones, City of Ashes, City of Glass, Clockwork Angel, City of Fallen Angels, Clockwork Prince, City of Lost Souls, Clockwork Princess (assuming this comes out before the next one), and finally City of Heavenly Fire (currently set to release in March of 2014). The reason for this is that there are some small cross overs between The Mortal Instruments and The Infernal Devices that can't be appropriately appreciated unless experienced as they were meant to be.

Have you read Clockwork Prince? What did you think? Let me know!

Posted by Somewhere Only We Know at 7:05 PM