Notes to Self - Review 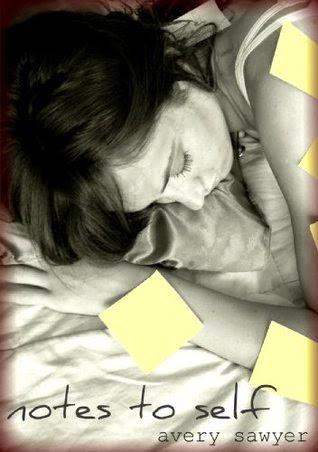 Robin Saunders is a high school sophomore with an awesome best friend, a hard-working single mom, and a complicated relationship with a sweet guy named Reno. She's coasting along, trying to get through yet another tedious year of high school, when Em suggests something daring. They live in Florida-- tourist central--and Emily wants to sneak into a theme park after midnight and see what they're made of.

When things get out of control, Robin wakes up in a hospital bed and Emily doesn't wake up at all. Just getting dressed becomes an ordeal as Robin tries to heal and piece together the details of that terrible night. Racing to remember everything in the hopes of saving Emily, Robin writes a series of notes to herself to discover the truth.

Notes to Self by Avery Sawyer gets 4 stars.

This book is about 15 year old Robin who, along with her best friend Emily, climbs a rollercoaster at a local amusement park. Robin and Emily both fall causing Emily to be in a coma and Robin to have a traumatic brain injury. While Emily remains in the hospital, Robin has to go back to her life. But life isn't so easy for Robin. She feels like she doesn't know who she is, and she's not sure she knew before the accident either. So, she proceeds to write notes to herself about the things she likes, how to get to her classes, how to open her locker, her favorite candy, etc. And thus she begins to figure out who she is.

Notes to Self gave me a new perspective on some things. I suppose you never think about what it would be like to have a traumatic brain injury unless someone you know has had one and you might wish to relate or empathize. But this book does a really good job of showing what someone with such an injury might have to go through. For instance, Robin realizes that she has feelings for a longtime friend, Reno, but Reno doesn't accept her feelings for him. Because she showed no signs of an attraction to him before her accident, he doesn't trust her current feelings--worrying that those feelings might go away with time as her injury heals. I would have never thought about how no one would trust your ability to make decisions because you're "different" than you were before, or because you "can't think correctly" since you have a brain injury.

I found it a smidge hard to believe that everyone at her school would treat her the way they do--horribly. I mean sure teenagers can be awful, mean, and bullying has become a major issue these days. I can imagine that some kids that didn't like Robin before might continue feeling that way towards her, but just random kids....I don't know. She has a brain injury. It's not something that can be helped. HOWEVER, considering the way that children with mental disorders are treated sometimes, I suppose it's really not that far fetched--which is horrible.

Because of her injuries, Robin learns what's really important in life. She appreciates life now that she's been close to death, and since Emily isn't able to live her's anymore. There are lessons here that we could all stand to learn.

I read through this one pretty quickly. The fall happens in either the first or second chapter, so you don't have to wait long for the story to begin. I really enjoyed my 2nd Amazon Prime Kindle Lending Library book, Notes to Self by Avery Sawyer. Check it out. 4 Stars.

Have you read Notes to Self? What did you think? Let me know!

Posted by Somewhere Only We Know at 11:23 AM