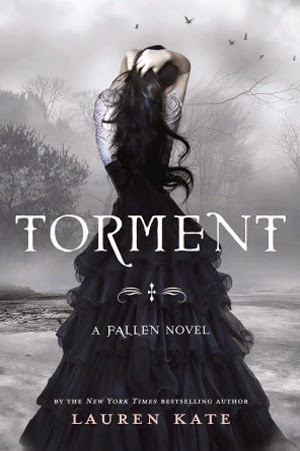 Goodreads description--How many lives do you need to live before you find someone worth dying for?

In the aftermath of what happened at Sword & Cross, Luce has been hidden away by her cursed angelic boyfriend, Daniel, in a new school filled with Nephilim, the offspring of fallen angels and humans. Daniel promises she will be safe here, protected from those who would kill her. At the school Luce discovers what the Shadows that have followed her all her life mean – and how to manipulate them to see into her other lives. Yet the more Luce learns about herself, the more she realizes that the past is her only key to unlocking her future . . . and that Daniel hasn't told her everything. What if his version of the past isn't actually the way things happened . . . what if Luce was really meant to be with someone else?

I feel kind of bad with my last couple of ratings. Don't get me wrong, I rate each book as I genuinely feels it deserves to be rated according to my own tastes and opinions. But 3 stars is not a "bad" rating. According to my rating scale, 3 Stars means "pretty good, I liked it." That being said, I'm sure you can tell that I'm giving Torment 3 stars.

I don't really have much to say about the book, and I think more than anything that's the reason why I'm giving it 3 stars. Luce was kind of annoying throughout the book, always complaining about what Daniel wasn't telling her. I wanted to yell at her "What part about you exploding in the past are you missing? Too much information too fast has been your downfall more than once. Give the guy a break." The whining was just getting old. Yet, if I put myself in her shoes, I don't like being out of control myself, and you can't really be in control without knowledge.

Through the book, I worried that Luce and Daniel's relationship that's portrayed as a soul-mate, life-long love relationship was going to turn out to be...well...not. And don't worry, I won't give it away. But Luce steps up and makes some tough decisions--decisions that make me believe her to be more mature and true with her feelings than some other leading ladies I've read (Nora from the Hush, Hush series anyone?).

Overall, I enjoyed it. The storyline moved pretty quickly and I'm looking forward to reading Passion and the other books in this series in the future--it might be a while, I've got quite the stack of books waiting to be read. Check it out, Torment by Lauren Kate, 3 stars.

Have you read Torment? What did you think? Let me know!

Posted by Somewhere Only We Know at 9:17 PM