Alright guys, so I know I'm a week late. I just couldn't make opening weekend happen this time. My friends, Kay, Amanda, Paula, and my huband Russ, went with me to see The Hunger Games the movie last night. And of course, I really enjoyed it. Since it was originally a book, I feel like it is not too far out of the scope of my blog to review it, so that's what I'm going to do.

Next, no cannons went off when Rue died or the other guy that Katniss shot in the same scene. I definitely missed that. 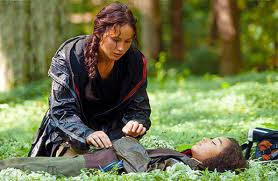 Also, for someone who might not have read the books but went to see the movie, I don't think they would really understand how the relationship between Katniss and Peeta was played up as part of their strategy in the Games. It is true that even Katniss and Peeta don't know how much is real and how much was faked for the benefit of everyone watching the Games, but that just really wasn't portrayed clearly enough. I found myself forgetting while watching the movie and had to keep reminding myself. It would have been nice to see that Katniss had to earn the presents from Haymitch by doing just that--playing up their relationship. The one parachute with the message "you call that a kiss" isn't enough to drive home that point.

They did a good job, in my opinion, showing the bakery scene. Specifically, showing it multiple times. But I don't know that the emotion and desperateness (if that's a word) that Katniss was feeling in that moment really came across. She was starving. She literally didn't think she was going to make it. Peeta throwing her that bread literally saved her life. And Katniss feels an obligation to Peeta because of that. She owes him. He saved her life. She has to return the favor. 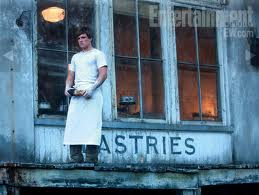 I will say that I really enjoyed seeing the behind the scenes stuff with the game maker and such. That was a nice added touch. And while alot of the stuff makes sense while reading the books--the way the people of the Capitol dress and such--really comes off as weird in the movie, but that's okay. And I guess, lastly, I'd like to add that my friend, Amanda, was very distraught that Buttercup was a black and white cat. Though that part didn't bother me at all. Overall, I was very impressed with the movie. Looking forward to the others in the future. Go see The Hunger Games movie. 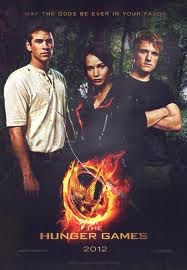 Posted by Somewhere Only We Know at 12:14 PM