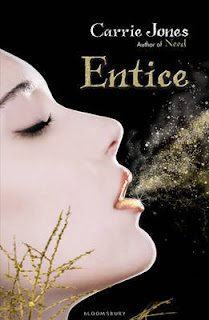 Goodreads description--Zara and Nick are soul mates, meant to be together for ever. But that's not quite how things have worked out. For starters, Nick has gone. He has been taken to the mythical place for warriors known as Valhalla. Zara and her friends might be able to get him back, it's just not going to be easy. Meanwhile a group of evil pixies is devastating Bedford, with more teens going missing every day. An all-out war seems imminent, and the good guys need all the warriors they can find. But even if Zara and her friends do discover the route to Valhalla, there's that other small problem: Zara's been pixie kissed. When she finds Nick, will he even want to go with her? Especially since she hasn't turned into just any pixie... She's Astley's queen.

Mama said, “If you don’t have anything nice to say, then don’t say anything at all.” But where’s the room for constructive criticism in that? I think it’s official that I’m in a reading slump. At least when it comes to YA—which makes me kind of sad. So fair warning: sarcasm, bitterness, frustration, possibly even small spoilers ahead.

Let’s just start with Zara. I was a fan of the first two books in this series. I was a fan of Zara and Nick. Yet in Captivate, Nick dies. Astley comes on the scene and I’m content to move on from Nick. Sad, okay. But I’ve moved on. Then we find out that surprise, surprise, there’s actually a way to save Nick and bring him back from the land of the gods. So what does that mean for Entice? It means the entire book is about a whiny Zara trying to find her way into the land of the gods and “save” Nick while simultaneously losing “good” pixies—meaning pixies aligned with Zara & Astley—a once-bad pixie, and even an unessential character that we might or might not have come to well nothing—she’s just kind of there as a throw away character, and I don’t consider this a spoiler because it was so obvious a 2 year old could have spotted her death coming from a mile away.

Zara whines and cries and just generally blusters about doing little productive and “squeeing” a lot—yeah that’s right “squee” in several different forms is used multiple times in this book. I find her to be selfish. And probably one of the most annoying aspects of this book is Zara’s “voice.” It’s hard to explain, but she thinks so ????????????? ugh...I don't know, I can't explain it. Ridiculous. And Issie is the same way, only worse. Some people babble and it’s endearing. I don’t find this to be so with Issie. How much of what she says has anything to do with anything that's going on? Not much.

Truthfully the secondary characters really seemed to disappear and not have much purpose in this book. Yet that I could overlook if Zara wasn’t so annoying herself or if we had more time with other characters we could like.

The plot was completely predictable. No twists, no turns, nothing unexpected, and altogether not a lot to get excited about. And not too much to talk about. The addition of Asgard, Odin, Thor, the rainbow bridge, even the one mention of Loki…I found all of that to be a bit cheesy. If Carrie Jones were writing for a different audience, one might call this fan service. And while I’m sure there are female, 13-35 years old, comic book fans, I’m not sure there are enough of them to call this “fan service.” Yeah, I know of these are aspects of ancient Norse mythology, but it's much more commonly known because of comics. I don't know. Plenty of people will probably disagree with me, but that's just how I feel. I wasn't a fan.

In keeping with my “if you don’t have anything nice to say, then don’t say anything at all, except constructive criticism” idea, I say all of that to say, keep out the comic book AND ancient mythology stuff unless you’ve found a way to make it better (or should I say, expounding upon its “cooler” parts), grow Zara or at the very least, please don’t make her experience much more than she’s capable of handling because I don’t really want to hear any more of her whining. Less on the meaningless ramblings and one track minds when it comes to Issie and Zara. More Astley. More character growth for Zara (I already said that, but it's worth a 2nd mention). Even 8/9 year old Arya from George R. R. Martin’s A Song of Fire and Ice reads more grown up than high-school-aged-pixie-queen-Zara. Shoot Dany’s only truly 13/14 years old, and Sansa 11/12 (both characters from A Song of Fire and Ice). I realize we’re talking about different cultures here, but still. I think the point still stands.

I do plan to come back for Endure. Since I liked Need and Captivate much more than Entice, I'm willing to hope this was a fluke. 2 Stars for Entice.

Have you read Entice? What did you think? Completely disagree? Did you love it? Did you hate it? Let me know!