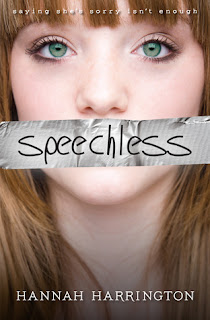 Until now. Because the last secret she shared turned her into a social outcast—and nearly got someone killed.

Now Chelsea has taken a vow of silence—to learn to keep her mouth shut, and to stop hurting anyone else. And if she thinks keeping secrets is hard, not speaking up when she's ignored, ridiculed and even attacked is worse.

But there's strength in silence, and in the new friends who are, shockingly, coming her way—people she never noticed before; a boy she might even fall for. If only her new friends can forgive what she's done. If only she can forgive herself.

I’m actually quite torn when it comes to how I feel about Speechless. I felt this book was totally cliché while being completely original at the same time. The subject matter of Chelsea Knot, best friends to the most popular girl in school—yet she knows this friendship hangs by a thin thread and requires a huge balancing act—finds out this huge secret and drunkenly blabs it to half the high school at this party. Something terrible happens as a result of her blabbing and she’s put into a situation where she has to blab again, but this time to the cops to rat out two of her “friends”—one of which happens to be the boyfriend of her “best friend.” The secret she finds out is cliché. The terrible thing that happens as a result of her blabbing is cliché. Her friendship with the popular chick falling to pieces because of the decision she makes to talk to the police is cliché. She’s tormented, picked-on, bullied, and harassed at school as a result of all of this is….do I need to say it again? Cliché!

Speechless was the straw that broke the camel’s back and resulted in this lovely rant post I did about being politically correct, books with agendas, and me being sick of this particular cliche.

However, I have to say that the part of the story that involved her vow of silence I found completely original. I’ve personally fasted for spiritual and health reasons, but I’ve never taken a vow of silence. And I’ve honestly never known someone who has either. Hannah Harrington says in the back of the book that she remembered high school kids participating in the National Day of Silence once a year to raise awareness of bullying and harrassment in schools, and that’s where the idea for this book came to her. While I was completely frustrated with the unoriginality of all the other plot aspects aside from the vow of silence, I did still find this book to be an acceptable read. It has a character that has a flaw and seeks to better herself by working on her flaw. There are just too many people that I know that are completely satisfied with where they are and see not only no need to grow and work towards growing, but they don’t even see their own flaws. Of course, I’m sure I’m chief among those willing to overlook a flaw or two. But I honestly do try to work on myself when I see an area that I’m struggling.

Chelsea is forced into the position of seeing her flaw magnified, yet she voluntarily takes some steps to change. She grows. And I do so love a story with character growth. She learns a lot about herself, a lot about other people. But probably most importantly she learns that just because she doesn’t feel the pain that someone else feels, doesn’t mean they don’t hurt. Sometimes teenagers and even adults have a hard time getting outside of themselves—seeing that life truly does not revolve around any one person, especially not me. Had I not so recently read other stories with similar plot lines (the bullying and losing the popular friend) maybe I wouldn’t have felt so put off by the storyline behind this one. *Side note: I was a little annoyed at how she jumped back into so much of a potty mouth after not speaking for so long. After all of that, she learned that words do matter, yet those are the ones she chose to use? *shrugs*

Hannah Harrington does a good job showing us as she shows Chelsea that everyone has feelings. And everyone is struggling with something behind the scenes that just because we don’t see their struggles doesn’t mean those struggles do not exist. Chelsea learns to forgive herself mostly as she witnesses other’s who are willing to forgive her. The saying is true, “to err is human, to forgive is divine.” And the next time you consider withholding your forgiveness from someone who doesn’t deserve it (because let’s face it, none of us do), think about whether you’d want to be forgiven if you were the one who needed it. And that ladies and gentlemen is the message of Jesus Christ and the cross—none of us deserve it, yet He offers His forgiveness freely to any who will accept it. How can I not forgive my brother or sister when Christ has forgiven me?

So…despite being torn between cliché and originality, I think Speechless gets 3 Stars from me. Have you read Speechless? What did you think about it? Let me know!