This week I'm featuring a book I'm actually a little nervous about. How can anything live up to the magic that was Harry Potter? Even from the same author. But because JK Rowling was brilliant with writing HP, I'm totally willing to give this a shot, even if it doesn't sound like something I might would read under other circumstances--yet neither was Harry Potter. 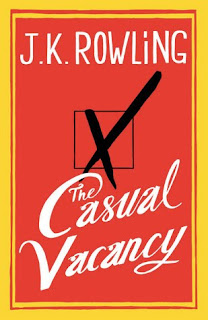 Goodreads description--When Barry Fairweather dies in his early forties, the town of Pagford is left in shock.

Pagford is, seemingly, an English idyll, with a cobbled market square and an ancient abbey, but what lies behind the pretty façade is a town at war.

And the empty seat left by Barry on the parish council soon becomes the catalyst for the biggest war the town has yet seen. Who will triumph in an election fraught with passion, duplicity and unexpected revelations?

The Casual Vacancy is J.K. Rowling’s first novel for adults.

What are you guys waiting on? Let me know!

Posted by Somewhere Only We Know at 4:37 PM