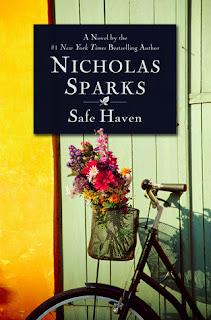 As I said in my review of The Guardian by Nicholas Sparks, the stories Mr. Sparks creates are, in my opinion, better fitted for film than for books. There's no doubt that he's a gifted storyteller, but each book has repetitive themes and events.

If I'm being truthful, the abusive relationship as described in Safe Haven hit home because I've recently discovered a situation close to home where emotional abuse resides, and it breaks my heart because I don't know how to help.

As books go, Safe Haven was an average read for me. It wasn't overly exciting or anything new, but there was nothing bad about it either. Safe Haven gets 3 stars from me. Have you read Safe Haven? If so, what did you think? Let me know!