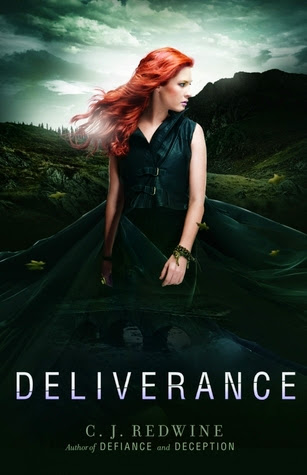 It took me entirely too long to read Deliverance. *hangs head in shame* This is one of those times when I got request happy and didn’t really think things through. Deliverance was available for review, but I hadn’t even read Defiance or Deception when I requested it, even though both were already on my TBR list. None of these books are short. And none of them were books that I flew through. I’ve since learned that requesting the last book in the series for review before I’ve read any of the previous books is not very smart (you’d think I would have known that up front). But anyway…I trudged through. Despite having enjoyed these books, they did take a lot out of me to read due to length and content.

Deception left us where Rachel has been kidnapped by Ian. Not exactly the best scenario. Logan and Willow are held prisoner in Lankensire shortly after, and Quinn is almost killed while in pursuit of Rachel. There’s a lot going on, and slim to none of it is good. The Commander is camped outside Lankeshire demanding Logan and Rachel’s punishment while also demanding the device he believes has been stolen from him. The only way out of Lankenshire without Rowansmark knowing about their involvement and putting everyone in danger is for Logan to allow himself to get captured by the Commander making an uneasy and temporary alliance.

There is so much that goes on in this book, yet at the time it didn’t feel like it because the book felt so long to me. Logan has to travel to at least two other city-states seeking alliances to build an army strong enough to take on Rowansmark. And Rachel learns that Rowansmark is really just a trap for Logan and instead of escaping on the way, she’s going to have to survive the entire trip to Rowansmark and disable the trap before Logan gets killed.

If you’re all about romance and kissing books, then Deliverance isn’t the right book for you. Really this entire series isn’t. Rachel and Logan spend about 85% of the book apart as they are on completely different paths with missions all their own. And that’s one of the reasons why I struggled with this one myself. I don’t have to read about romance all of the time, but that definitely helps drive a story for me. I did enjoy the moral of redemption and forgiveness that permeated the entire series and especially Deliverance. It’s always nice to read a story that has a point I can get behind.

-Now I know that sometimes, for better or for worse, people aren’t who they seem to be. Sometimes the thing you think will fix everything ruins it instead. And sometimes what hurts you has to tear you apart before it makes you stronger.

-“I’m of the opinion that any leader who cares about his failings is a leader worth following.”

-“Healing is the hardest thing you’ll ever do.”

-Better to be honest about my fear than to see it come true.

-“Girls like to feel special. Protected. But there’s a fine line between feeling protected and feeling like a fence post being marked by a stray dog.”

I enjoyed Deliverance, but I won’t say that it blew me away. It didn’t quite suck me in. I really read it in 10% increments. And even there at the end I found myself almost apathetic and just wanting to finally be finished with the story that seemed to drag on a little too long. Yet there was nothing much wrong with it at the same time. I’m giving Deliverance 3.5 Stars. Have you read Deliverance? What did you think? Let me know!