All Things Halloween Review - The Retribution of Mara Dyer 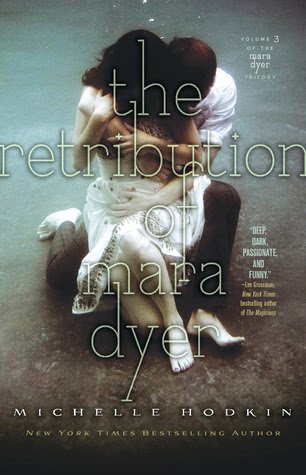 Source: Christmas Present from my sister-in-law

Goodreads description--Mara Dyer wants to believe there's more to the lies she’s been told.
There is.

She doesn’t stop to think about where her quest for the truth might lead.
She should.

She never had to imagine how far she would go for vengeance.
She will now.

Loyalties are betrayed, guilt and innocence tangle, and fate and chance collide in this shocking conclusion to Mara Dyer’s story.

I knew I wanted to feature The Retribution of Mara Dyer in my All Things Halloween event. These books just fit Halloween and this time of year so perfectly. But when this book was published I saw mixed responses about it. I never saw anything specific as a like or a dislike and at this point, I can’t even remember who I saw that didn’t enjoy the end of this series. But I’ve had that stuck in the back of my head and it really caused me to put off reading this book for way too long. But I started getting into the Halloween spirit and slots were already filling up for reviews in the month of October, plus this being a series ender, I finally decided to pick it up.

Since it’s been so long since I read The Evolution of Mara Dyer, I felt a little lost upon starting this one. I couldn’t remember most of the minor details, but I did remember the overall gist of the previous book. It just didn’t make for the smoothest transition into starting this one. One thing I do remember commenting on in my review of The Evolution of Mara Dyer is how even now I still can’t decide if Mara is actually sane or if she’s crazy. The opening chapter of The Retribution of Mara Dyer takes me right back to that place. Is Mara possessed? Is that what’s wrong with her? That first chapter truly had some bits that creeped me out—again perfect for a Halloween read. I said it before, but it truly shows the strength of Michelle Hodkins’ writing ability that she can still make me question what’s going on in Mara’s head and body even now. But I think what I said in that review was right on…as long as Mara questions her own sanity, the reader will too.

Through all of the things that have happened to Mara from book 1, The Unbecoming of Mara Dyer, until now Mara has changed quite a lot. She’s no longer the terrified little girl afraid of her own shadow. She’s learned a lot about who she is and she steps up to protect herself, her friends, and her family using her ability as well as just physically taking control of situations when her ability couldn’t be used. Most of her actions felt justified, but there’s an edge of true insanity and crossing the lines as well. Mara is now the terror not the terrified. It was hard because at times I didn’t even feel like I could root for Mara, but this wasn’t necessarily a story about backing the hero or the villain…it wasn’t always about right and wrong.

Whereas Noah has been such a rock for Mara in the prior books, Mara and Noah are apart for the majority of The Retribution of Mara Dyer. As someone who thrives on romance, this wasn’t my favorite part, but it did drive me to keep reading so that I could get to the point when the two would be reunited. Yet, Michelle Hodkins did me a solid. When these two are together, the emotions run high, passion is at its highest and her writing is as good as ever. All of my favorite moments revolved around Mara and Noah’s interactions with each other. I will say that I actually read the last page of this book before I even started it just hoping to get enough information to know whether I should dread or look forward to the ending. I won’t tell you what I found there.

One of the things I loved about the prior books in this series was the presence of Mara’s family unit. An entire intact family unit. We see Mara’s family for the briefest of scenes—minus Daniel who still has a decent part in this book. But I didn’t feel like the book suffered for them not being present. It’s all in the context I guess. Daniel was just as supportive of Mara as ever and I continue to love him as my favorite sibling book character ever. Just as Mara’s family wasn’t present, her friends Jamie and Stella were. They both added to the story, and I loved how they stuck by Mara—especially Jamie—filling in for Noah’s presence (or lack thereof) as much as they could.

The Retribution of Mara Dyer drops a lot of information on you. Mara and her group of friends do some recon to try to figure out who’s behind them all being captured, trapped, experimented on, and tortured at Horizons. They have to figure out who Kells really is and why she’s so invested in them. They have to figure out the involvement of the Santorini priest Lukumi. And what they all have in common with each other as well as what they don’t. There’s history as well that plays a part. It’s all a really elaborate puzzle, and I really feel like the entire series deserves a re-read in order for me to properly place all the pieces exactly where they go. But if you’re not a fan of this type of story then you might struggle with this book. Even though Michelle Hodkins’ writing during the moments Mara and Noah are together is beautiful and poetic, the majority of the book doesn’t really feel that way. The sentences still flow well enough, but I remember thinking that I wasn’t as impacted with the beauty of any specific passage during this book as I have been in the past. I did love the dropping of a lot of pop culture references without actually name dropping. That’s how pop culture references should be done. If people catch them, great. If not, the book isn’t ruined. And they don’t specifically date the book either like name dropping tends to do.

-“Are you mad at me too?” My voice sounded dead. “Mad at you?” He seemed surprised by the question. “No,” he finally said. “I’m not mad at you.” But he was still standing there, looking at me in a way I couldn’t describe but didn’t like. “Then what?” “I’m scared of you,” he said, and left the room.

-“I would rather die for her than live without her.”

-“The villain is the hero of her own story. No one thinks they’re a bad person. Everyone has reasons for doing what they do.”

-You are like fire; you will burn wherever you go. If contained, channeled, you can bring light, but you will also always cast a shadow.

In the end, I still had a few questions. I didn’t end the book jumping up and down or smiling from ear to ear, but I didn’t end it disappointed either. I continue to love the way that Michelle Hodkins continually had me guessing about what’s going on with Mara, who’s behind everything, where Noah was, and how everything fit together. The book does have quite a few f-bombs so be prepared for that if you take issue with that. In the end though, I feel like The Retribution of Mara Dyer deserves a solid 4 Star rating. And I feel like the series will be getting a re-read from me which always indicates good things. Have you read The Retribution of Mara Dyer? What did you think? Let me know!