All Things Halloween Review - Ignite Me 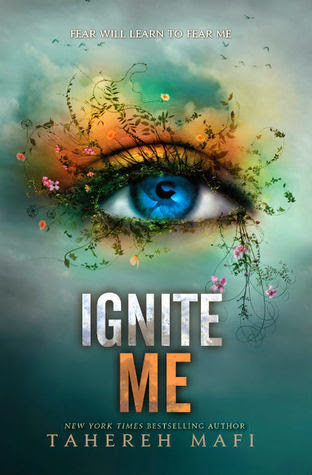 With Omega Point destroyed, Juliette doesn’t know if the rebels, her friends, or even Adam are alive. But that won’t keep her from trying to take down The Reestablishment once and for all. Now she must rely on Warner, the handsome commander of Sector 45. The one person she never thought she could trust. The same person who saved her life. He promises to help Juliette master her powers and save their dying world . . . but that’s not all he wants with her.

The Shatter Me series is perfect for fans who crave action-packed young adult novels with tantalizing romance like Divergent by Veronica Roth, The Hunger Games by Suzanne Collins, and Legend by Marie Lu. Tahereh Mafi has created a captivating and original story that combines the best of dystopian and paranormal, and was praised by Publishers Weekly as “a gripping read from an author who’s not afraid to take risks.” Now this final book brings the series to a shocking and satisfying end.

**Spoilers for Unravel Me and prior books**

I was a little wary of starting Ignite Me. Even though Unravel Me was beautifully written, I struggled with it a little bit. I didn’t really like the way that Juliette broke up with Adam because she found out that touching her is actually hurting Adam and he’s having to learn how to control his ability to prevent that. And even though I could see in the interactions with Warner that he truly cares for Juliette, there’s still a lot that she needs to know in order to make any decisions regarding Warner and her physical connection to him. That being said, my friend Paula got around to reading Ignite Me before I could and she said that I would enjoy the ending, so I decided to go ahead and go for it. Besides, I needed to mark a series ender off my list.

Unravel Me ended with Juliette getting shot in the chest by Warner’s father. But Warner does everything he can to save her life. She wakes up in Ignite Me back on base and in Warner’s bed. Warner tells her that all of her friends from Omega Point are dead. But come on. Really? I don’t think anyone reading this book believed that for a minute. Juliette doesn’t believe it either. Slowly Warner begins to open up to Juliette. She asks him some difficult questions concerning their pasts, how he treated her, how he treated others, things that he said, and slowly Warner begins to admit the truth to her—truths that change everything. Her perception of who Warner is is just that…a perception and not the real thing at all. Warner agrees to take her to Omega Point to see the devastation for herself. And of course, Juliette was right. Turns out 9 people survived. It might be a spoiler, but I think anyone could guess that it just so happens that the most important people survived.

Juliette has changed. She’s not the quiet, scared girl that she once was. And I loved how this is the reason why Tahereh Mafi doesn’t use the strike method in Ignite Me. She didn’t come out and say that’s why, but Juliette talks about how she used to be screwed up in the head and didn’t understand herself at all. And now things are clearer. So while I missed the strikes some, I thought this answer was pretty brilliant.

Again, I don’t want to spoil anything, but (highlight for spoiler), I love how this played into Juliette’s transitioning away from Adam and towards Warner. Between how much she’s changed herself, how Adam wants her for who she was and Warner wants her for who she can be, how Warner isn’t at all who she thought he was, Adam says he would rather her be dead yet Warner proved that saving her life was of the utmost importance to him, how Juliette subconsciously thought she might have to be with Adam by default since he was the only person who could touch her, until well he wasn’t, and how she learns that she can turn off her ability and thus isn’t forced into being with Warner by default but wants to be regardless…all of these things added up to a lovely transition from Juliette/Adam, to Juliette confused, to Juliette/Warner. And I loved it. One of the best transitions from one guy to another I’ve read.(end spoiler)

I will say that the ending felt rushed to me. Things start happening relationship wise about the 70% mark. But the big battle, the culmination of all the events thus far basically took place from 90% through the end. I don’t know, that just wasn’t a lot of time to experience the events. And truthfully, it all seemed a little too easy. But this didn’t bother me enough to really affect my overall impression of the book.

As always, Tahereh Mafi’s writing was poetic and beautiful. I highlighted so much. And I have to share some of my favorite quotes with you.

-My eyes are filling fast with tears and I blink and blink but the world is a mess and I want to laugh because all I can think is how horrible and beautiful it is, that our eyes blur the truth when we can’t bear to see it.

-For so many years I thought my life was difficult; I thought I understood what it meant to suffer. But this. This is something I can’t even begin to comprehend. I never stopped to consider that someone else might have it worse than I do. It makes me feel ashamed for ever having felt sorry for myself.

-And all I can think is not now. Not here. Not when so much is uncertain. If only my emotions would understand the importance of excellent timing.

-There’s a strange kind of freedom in the dark; a terrifying vulnerability we allow ourselves at exactly the wrong moment, tricked by the darkness into thinking it will keep our secrets. We forget that the blackness is not a blanket; we forget that the sun will soon rise. But in the moment, at least, we feel brave enough to say things we’d never say in the light.

-Because being this close to you is doing things to me. Strange things and irrational things and things that flutter against my chest and braid my bones together.

-“Don’t do that,” he says. “Don’t ask me questions you already know the answers to. Twice I’ve laid myself bare for you and all it’s gotten me was a bullet wound and a broken heart. Don’t torture me,” he says, meeting my eyes again. “It’s a cruel thing to do, even to someone like me.”

-Words, I think, are such unpredictable creatures. No gun, no sword, no army or king will ever be more powerful than a sentence. Swords may cut and kill, but words will stab and slay, burying themselves in our bones to become corpses we carry into the future, all the time digging and failing to rip their skeletons from our flesh.

-But I’m still fairly terrified, and I’ve never needed to use the bathroom as much as I do right now.

Ignite Me was better than I was expecting it to be. I was worried about the direction of things at the end of Unravel Me, but despite a hasty ending Ignite Me hit all of the aspects I was hoping for. I hate that I put this one off for so long, but I’m glad that I finally know how it all ends. Now I just need to go back and re-read through the whole series from start to finish. Ignite Me gets 4 Stars. Have you read Ignite Me? What did you think? Let me know!