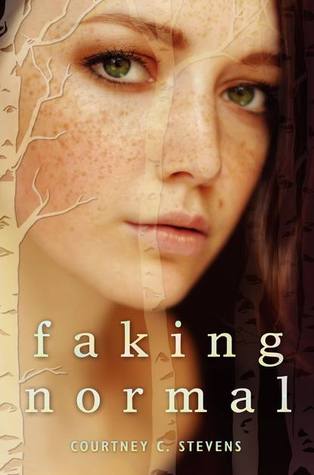 Alexi Littrell hasn't told anyone what happened to her over the summer. Ashamed and embarrassed, she hides in her closet and compulsively scratches the back of her neck, trying to make the outside hurt more than the inside does.

When Bodee Lennox, the quiet and awkward boy next door, comes to live with the Littrells, Alexi discovers an unlikely friend in "the Kool-Aid Kid," who has secrets of his own. As they lean on each other for support, Alexi gives him the strength to deal with his past, and Bodee helps her find the courage to finally face the truth.

I read The Lies About Truth a while back for review, and I enjoyed it much more than I expected to. It wasn't a perfect book, but when I got to the end of my review copy and found the first chapter to Faking Normal I was hooked already. The description above is kind of weird to me. It seems very backwards. Within the first chapter and really the majority of the book, Bodee's story is much more transparent than Alexi's is. Bodee's story is really revealed within that first chapter and Alexi's story is dragged out throughout the majority of the book. The description hints at it and the book drops some pretty big clues but what I can say without feeling like I'm giving too much away is that Alexi was sexually assaulted over the summer and has been holding that inside of her.

Alexi was a character that I connected with very quickly. Her experience has changed her. And one of the ways she demonstrates that is by reaching out to the kid that no one is friends with. When Bodee finds himself in an extremely painful situation, Alexi can't just do nothing. Granted she doesn't really say or do much of anything, but that one small act creates a bond between these two. They begin speaking in the hallways at school. And even though Bodee doesn't have a clue what happened to Alexi over the summer, he's able to see that she's in pain very similar to pain he's witnessed himself.

Bodee was great. I loved him so much. Despite being a loner, Bodee sees beyond himself. He's perceptive and deep even though he's quiet and sullen. Bodee's ability to help Alexi even when his own life and experiences have been so difficult is admiring. He could easily see himself as a victim and think only of himself during this time, but he's so much more than that. Alexi stands up for and helps Bodee, but he does just as much and more for her as well. Their friendship was so slow building and realistic. I loved it. While the two did seem to have an instant connection and an ability to be utterly honest with each other when they both lie so well to everyone else, I never really felt like they rushed into anything.

Courtney C Steven's writing was even better in Faking Normal than I remember it being in The Truth About Lies. I highlighted a ton, and so here are my favorite quotes:

-I'm more like Heather than she knows. Scared ... and hoping a boy will love me someday even though I'm a mess.

-Sometimes the lies I tell Heather aren't little and white. They're a dab of honey-beige foundation applied to the blemishes of my life.

-We're already more than the sum of my lies. So I just breathe and look away, trying not to lie with my face, but to stand in the presence of the truth. It hurts.

-Faking normal is a skill I learned seventy-seven days ago, but tonight it's going to require everything I have.

-The power of Bodee is in the way he reads me, see through me, and then understands the truth behind the facade. He's the guy who can walk straight through the House of Mirrors on the first try.

-"A man is partially made up of his words."

-"He matters more than you planned?" "No." I swipe the tears away. "It just sucks not to matter more than that."

-I've lived all but two weeks of my life without Bodee. But now, sitting with him in my fort, I know these two weeks have been God walking right into my life like he has flesh and Kool-Aid colored hair.

-Evidently, the gestation period for a bad idea is about ten seconds.

Faking Normal will easily fit into my top ten favorite books I've read this year (2015 when I wrote this post). It was so much more than I expected. This is a deep book full of painful events and the light that finding a friend within the darkness can bring to someone's life. I highly recommend this book. Heavy topics, little language, but deeply emotional. Faking Normal gets 5 Stars from me. Have you read Faking Normal? What did you think? Let me know!