The Heart of Betrayal - Review 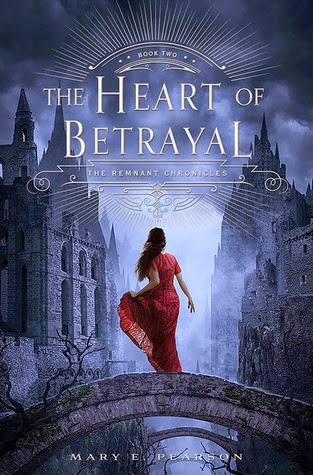 Source: Borrowed from my sister-in-law

I remember Holly saying that The Heart of Betrayal had a slow beginning. I've said it before, but this year (written in 2015) has been a struggle for me reading wise. And so picking up something that is even associated with the word "slow" has been scary for me. However, I loved The Kiss of Deception. Of course, I'd get around to The Heart of Betrayal eventually. And I didn't find it slow at all. That's even with having to put it down for long stretches at a time.

The Kiss of Deception ended with Lia and Rafe both making it to Venda as prisoners. The problem is, Venda doesn't take prisoners. Both are subject to death at any moment, but luckily enough, both are able to convince the Komizar that they can be of use to him and his agenda of gaining more and more power.

While The Kiss of Deception definitely had an edge of a love triangle, The Heart of Betrayal has a much more determined feel for where Lia's feelings lie. As the description shows: things are quite complicated. Turns out Rafe isn't who Lia thought he was. He lied to her. But I was annoyed at how indignant she was about this considering that she lied to him just as much. Kaden is an assassin sent to kill her. Granted, he's chosen not to do so, but instead has turned her over to the Komizar as prisoner. Of course, she still has a deep connection to both men, and deception and betrayal are just beginning.

Lia's always believed Venda to be a land of savage people, but what she learns while being a prisoner among them is that there are always the good and the bad with every nation of people. Some deserve the name savage. Others not only embraced her but offered her assistance at risk of their own lives.

I will say that The Heart of Betrayal had a different feel to me than The Kiss of Deception. I mean not an entirely different feel, but definitely different. Of course, The Heart of Betrayal doesn't have the reader as in the dark as The Kiss of Deception, but there were still plenty of twists to keep me on my toes. There were a couple of places where I could see Lia going in both directions offered to her so I really wasn't sure what path she would end up taking. I guess The Heart of Betrayal felt a little more political to me. The politics of the nations certainly came into play but wasn't fully the entire focus of the book either.

As with The Kiss of Deception, I really enjoyed Mary E Pearson's writing style. My favorite quotes:

-"Trust me, Princess," he whispered. "There's always more to take."

-Now I understood why Sven preferred soldiering to love. It was easier to understand and far less likely to get you killed.

-"A charitable act is no reason to sell your soul to someone."

-"Let me make this perfectly clear to you. Though some might seek to make it seem otherwise, I am not a bride to be bartered away to another kingdom, nor a prize of war, nor a mouthpiece for your Komizar. I am not a chip in a card game to be mindlessly thrown into the center of the pot, nor one to be kept in the tight fist of a greedy opponent. I am a player seated at the table alongside everyone else, and from this day forward, I will play my own hand as I see fit."