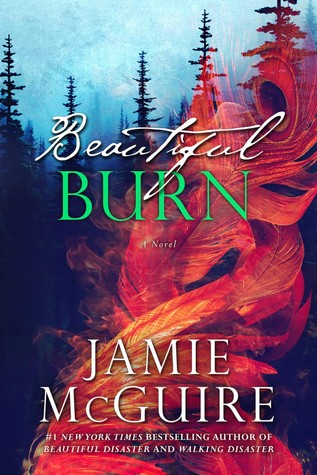 Goodreads description--Fresh out of college, Ellison Edson has fallen through the cracks of rock bottom. While staying in her family’s vacation home in Colorado, her behavior has finally gained the attention of her parents—but not in the way she hoped. Cut off from the millions she’s always taken for granted, and left alone to fend for herself, Ellie spirals further out of control, making a mistake she can’t take back.

Like his twin brother Taylor, Tyler Maddox is a member of the Alpine Hotshots, fighting wildland fires on the frontline. As arrogant as he is charming, Tyler’s nomadic lifestyle makes it easy to contain his relationships to one night. When he meets Ellie at a local party during off-season, her extreme personality and dismissive attitude fascinates him at first, but as his feelings deepen, Tyler realizes that the crippling inner demons of the woman he loves might be the strongest enemy any Maddox has ever faced.

I'm kind of torn on Beautiful Burn. This was probably my least favorite book of the series, and that rests solely on Ellison as a character. I was never quite sure what to think of her while reading the previous books in the series when she would make an appearance, and even now that I know and understand he more, I still don't really like her that much. Ellison starts Beautiful Burn in a rough place. She's the daughter of an extremely rich family, but she's bored and unhappy. She's been all over the world. It appears that a lot of her motivation is trying to get her parent's attention. And of course, bad behavior elicits more of a response from her parents than good behavior. And that behavior consists of alcohol, drugs, partying, damaging her parent's property, and of course all kinds of sexual behavior not limited to one gender. I just found that I couldn't connect with Ellison.

Tyler becomes enamoured with Ellison after they have a one night stand. Relationships in new adult books seem to almost always start with some kind of sexual experience and then the characters actually get to know each other. I can't help but roll my eyes at this because physical attraction is never really a foundation worthy of building anything lasting. I was confused with how willingly Tyler sticks by Ellison despite her repeated relapse behavior. It was at times hard to see what he saw in her.

I could really relate to Ellison realizing how far she'd fallen and wanting to do better, but her journey was not one of a steady upward track. It was more like one step forward and ten steps back. I really wanted her to want more from herself, more than she did.

But like Jamie McGuire's other books, I was pretty hooked despite my frustrations with Ellison. I was excited to see what tie ins to the previous books might exist. While events often were overlapping or replicated in Beautiful Burn there really wasn't some big surprise way that this piece of the puzzle fit with the rest of the books in the series like the previous ones did. This was a slight letdown, but it also meant that Jamie McGuire didn't force anything that shouldn't be there.

I still find it a bit unbelievable that 4 Maddox brothers essentially fall in love with their happily ever afters all during the exact same time period. Yet, that's not something to question too deeply. I just wanted to enjoy each book and each ride.

I'm sad to see The Maddox Brothers series come to an end. Again, Beautiful Burn is my least favorite in the series. That being said, I still read it really quickly. Beautiful Burn gets 3 Stars from me. Have you read Beautiful Burn? What did you think? Let me know!