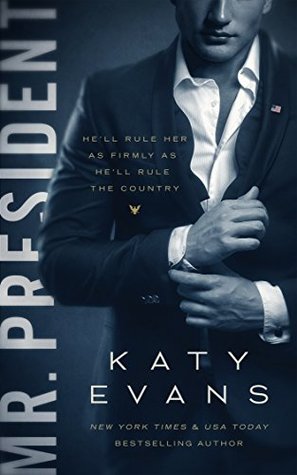 He's won the hearts of millions. But is he willing to lose his?

I met the president’s son when we were both young. Matthew Hamilton was handsome, polished, and intelligent. I’d never met a boy like him.

He promised me that he’d never run for president. I promised that if he did, I’d be by his side.

Three terms later, an invitation to join Matthew Hamilton’s campaign is the most exhilarating opportunity I’ve ever experienced. I'm determined to make a difference; he is determined to win.

Focused on his goal, Matt is steadfast, ruthless, and disarming. All eyes are on him and his popularity is surging. But soon, the next possible president of the United States is possessing me in more ways than one—and despite the risks, I'm helpless to resist.

We're stealing touches, stealing moments, and stealing away at night. But our chemical connection is quickly becoming dangerously combustive, putting not only my heart, but Matt's chance at the presidency on the line.

Winning will take everything.

Walking away will be the hardest thing of all.

I was intrigued by Mr. President because of how into the 2016 US Presidential Election I was. The older I've gotten the more involved I find myself in politics. I hate the sides that it brings out in people, and I don't want to get into the pros or cons of the political candidates that we had this year or the mess of an election year it was, but all of that had me interested in this book. The idea of a candidate falling in love during the campaign process was a unique one. So I thought I'd give this a go.

I've never read Katy Evans before, and I should have been warned by the description. While there are no direct references to anything that would have turned me off, the description has several subtle hints at a direction that I'm not all that interested in. So I'm going to say upfront that Mr. President was not as good as I hoped it would be.

Charlotte and Matt meet when she's 11 years old and he's about 24. (I believe that's the right math.) Matt's father, president at the time, tells Charlotte that Matt's going to be president one day, but Matt has no desire to run or be president. Charlotte is so enraptured by Matt. He's her first crush. So she decides to do what little girls do and write him a letter telling him that if he does decide to run then she's going to help him campaign. In about 2 years, Matt's father is killed and Charlotte and Matt meet again at his father's funeral. So Charlotte is now about 13 and Matt should be about 26. The events in the book take place 11 years from the time they first met making Charlotte 22 and Matt 35. While I have no problem with the age gap between 22 and 35 (my husband and I have 12 years in between us), the gap between 11 and 24 is a bit too much to stretch the imagination. While Matt never claims to have had a crush on Charlotte at that age, he does suggest that she's been on his mind throughout the last 11 years. Some of Matt's comments concerning their past were too much for me.

I get that Matt's hot and Charlotte's had a crush on him from the time she was a little girl, but she just about to melt in a puddle of horny goo from minute one. There's attraction. Sure. And then there's ridiculousness. I felt like every sentence of this book was filled with innuendo except for those times when no suggestion was necessary. It's just too much. A scene here or there doesn't bother me, but when an entire book is filled with nothing but sexual content it drives me crazy. This is not good writing. I know this is what some readers are looking for, but it's not good writing. Less is more. And in the case of Mr. President MUCH MUCH less is more.

Expanding on that point, Matt and Charlotte know that having a relationship of any kind is temporary. Matt saw his mother take a back seat to the presidency for his father, and he refuses to do that to someone else. Charlotte knows where Matt stands. They both know that getting caught together will spark a scandal and cost Matt the presidency. Although they both claim that Matt becoming president is THE MOST IMPORTANT THING, in the moment when push comes to shove, they choose each other and their physical desires EVERY SINGLE TIME! I couldn't root for Matt to get the presidency because I kept feeling like he was proving over and over again that he doesn't have what it takes to be the president. Self-sacrificing and making the right call when it counts in the moment. And I couldn't root for Charlotte to get her man because every time she tried to stand up for herself and tell Matt what she needed, she caved like a cadbury creme egg. So in the end, I guess I just really had no respect for these characters.

Quotes that support my thoughts:

-I don't know whether I should do this or not, but right now all I hear my body say is that I need to touch this man.

-So perfect and so right, I forget that it's wrong.

-It was reckless--and it didn't matter.

-Matt is going to be the end of me. Maybe the end of my career, too. And I should probably take that into serious consideration before I do something reckless. I don't.

-What we're doing is risky, but how can it be wrong when it feels so right?

-Nothing matters, it doesn't matter.

I'm sorry guys, but again I just don't want to read about characters that have no backbone, about characters that know what the right course of action is but ALWAYS choose the wrong. An occasional mistake or slip up might be understandable and forgivable, but a continual trek down a path that leads nowhere all the while the character is constantly aware that they're making the wrong choice is just not for me. I love reading about strong characters. Especially strong female characters. The ones that can stand up for themselves. The ones that say "NO! I will not settle for less than what I deserve. I will not settle for this compromised crap position you want to give me. I will not be used by you." Think Jane Eyre. When she found out that Mr. Rochester was married but wanted to marry her anyway, she couldn't do it. Even if his current wife was stark, raving mad. Even if it was the hardest thing in the world for her to do. To walk away. To RUN away. Even if she was haunted by him. Even if she wasn't sure she would ever find love again. I respected the crap out of Jane Eyre. Charlotte is no Jane Eyre. And Matt is worse than Mr. Rochester.

I found some aspects of Mr. President confusing or contradictory. Like a moment Matt says "Growing up, there were actually very few people in my life that I could be certain wouldn't run to the media with the story a night later." But then later he's called a playboy. and we're told how much of a bad boy Matt is and how he's frequently been in the news for his flings with women (I'm paraphrasing). This is just one example.

I will say that I was impressed and appreciative that Katy Evans chose to go completely fictional with the candidates in Mr. President. I was half expecting them to be a mirror image of the ones we had in 2016 and I was cringing in fear of having to relive that whole mess again. While her candidates might have taken qualities from some real life individuals, she was pretty vague about them and the actual politics behind them. Just the simple fact that Matt is running as an Independent and not for one of the two major political parties was a relief. I really appreciated this and I feel like making these choices allows Mr. President to appeal to all readers and not just one political party or other.

Mr. President caused me to evaluate myself in what I'm looking for in a book. While, I love books that are fast reads because they are driven by emotion, I find that I don't love books that are driven by physical desire. Even books that are emotionally driven can often have the characters continually following a path they know isn't right. And that's not what I'm looking for either. Evaluating this for myself prompted me to write this discussions only we know post where I dive deeper into figuring out which books are right for me and why.

So I don't think if you've read even a portion of this review that you'll be surprised by me saying that I did not enjoy Mr. President. It wasn't what I hoped it would be. It helped me realize that this is the exact type of book that I don't enjoy reading. The characters constant decision to follow a path they both know to be wrong for each other and for the country (assuming Matt becoming president would be the best thing for the country) meant that I couldn't support or respect these characters. And that makes rooting for them pretty impossible. I originally thought that I would try to read Commander in Chief in hopes that most of what I found wrong with Mr. President would be solved in it, but since writing this review, I don't see the point. Mr. President gets 1 Star. Have you read Mr. President? Let me know!