Second Grave on the Left - Review 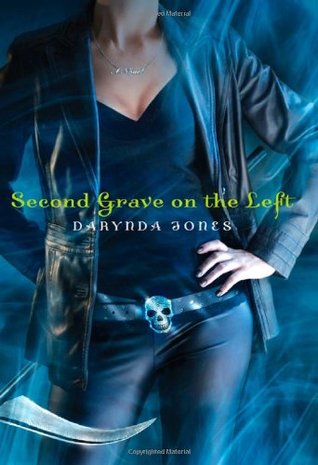 Goodreads description--If you hang around with dead people, life can get pretty complicated. Take it from Charley Davidson, part-time private investigator and full-time Grim Reaper. Complicated is her middle name. The deceased find her very sparkly. Demons find her irresistible. And one entity in particular wants to seduce her in every way possible. When Charley and Cookie (her best friend/receptionist) have to track down a missing woman, the case is not quite as open and shut as they anticipate. Cookie's friend Mimi disappeared five days earlier. Mimi then sends Cookie a cryptic message telling Cookie to meet her at an nearby coffee shop. The coffee is brewing, but Mimi's still missing. There is, however, a clue Mimi left on the bathroom wall: a woman's name. Mimi's husband explains to them that his wife had been acting strange since she found out an old high school friend had been murdered. The same woman whose name Mimi had scribbled on the bathroom wall.

Meanwhile, Reyes Alexander Farrow (otherwise known as the Son of Satan. Yes. Literally) has left his corporeal body and is haunting Charley. He's left his body because he's being tortured by demons who want to lure Charley closer. But Reyes can't let that happen. Because if the demons get to Charley, they'll have a portal to heaven...well, let's just say it wouldn't be pretty.

Can Charley handle hot nights with Reyes and even hotter days tracking down a missing woman? Can she keep those she loves out of harm's way? And is there enough coffee and chocolate in the world to fuel her as she does?

Here is your signpost for the most hilarious read of the year: Second Grave on the Left.

Charley Davidson and her entire crew pulled me in with First Grave on the Right. Charley, Cookie, Reyes, Garrett, Uncle Bob, Angel, and more. I love that I'm only two books into the series and I'm connecting to so many of the characters. I like them all. I'm intrigued by some more than others. But I look forward to these books and want more. Specifically, Cookie is a lot more involved in this one as her friend is missing and is Charley's main PI case.

The writing is spot on in this series. I love how witty and funny Darynda Jones writes Charley. She's not really laugh-out-loud funny but smart and witty (I already said that)--sometimes sarcastic. She's quick. I love it. Occasionally, there were some comments from other characters that sounded more like Charley than themselves, but hey maybe she's rubbing off on them.

I wanted more Reyes in this book. The times when he was present were usually short encounters. It drove me mad in a good way. I wanted more and that caused me to devour pages hoping to see if Charley would find him in time or not. I feel like there's so much to explore between Charley and Reyes yet I wonder how it will stretch out through the entire series in a satisfying way...not too fast and not too slow. So far, two books in I'm satisfied in a dying-to-know-more kind of way.

I also enjoyed the dynamic that was explored toward the end of the book surrounding Charley's family.

If you're in the market for a new fantasy series, I highly recommend this one. There's enough romance to satisfy my heart, but it's held back to a level that has me on pins and needles in the best kind of way hoping for more soon. The writing is close to perfect. I love the quick wit. And there's so much more. All of the characters are dynamic and complex. I'm looking forward to more and will probably dive into book 3 immediately. Second Grave on the Left gets 4.5 Stars. Have you read Second Grave on the Left? What did you think? Let me know!