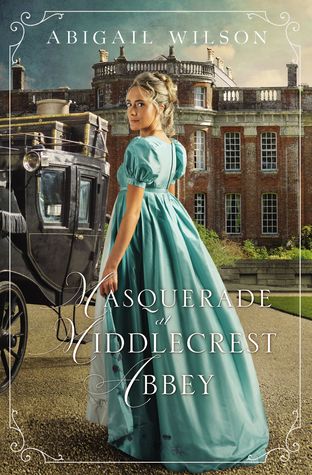 Goodreads description--When the widowed Lord Torrington agreed to spy for the crown, he never planned to impersonate a highwayman, let alone rob the wrong carriage. Stranded on the road with an unconscious young woman, he is forced to propose marriage to protect his identity, as well as his dangerous mission.

Trapped by not only the duty to her country but her limited options, Miss Elizabeth Cantrell and her illegitimate son are whisked away to Middlecrest Abbey by none other than the elder brother of her son’s absent father. She is met by Torrington’s beautiful grown daughters, a vicious murderer, and an urgent hunt for the missing intelligence that could turn the war with France. Afraid of what Lord Torrington might do if he learns of her son’s true identity, Elizabeth must remain one step ahead of her fragile heart, her uncertain future, and the relentless mystery person bent on her new family’s ruin.

I have said before but I love marriages of convenience that turn into something more. Yet I have a hard time understanding why or how one could think it would be a good idea to marry the brother of the father of your illegitimate child and still plan on keeping the identity of the father a secret. Especially when you think the child bears a resemblance to his father.

That was my issue going into Masquerade at Middlecrest Abbey. But I quickly came to the realization that it didn't stop me from enjoying the book. The first two sentences provided a good opening and I didn't want to put the book down after.

Elizabeth has been through a lot in her 26 years. Her parents died leaving her and her brother deeply in debt. Her brother tries smuggling as a desperate attempt to provide for her. Thankfully she has a cousin who takes her under her wing when her brother is arrested. During her 2nd Season, she falls in love with a man who seems to return her affections. He even asks his father about marrying her but her history doesn't make her marriage material according to his father and when she announces that she's pregnant, he abandons her altogether. Thankfully her cousins still allow her to live with them but she's secured a position as a housekeeper for a friend in Dover and decides to take her son and go. Unfortunately, she wasn't planning on being held up by a highwayman and involved in a carriage crash.

Adrian is a spy. He has spent the last 15 years keeping his family life from his spy life. But he made a mistake. He held up the wrong carriage. And being caught alone with an unconscious woman and then pretending to be her husband to get her set up at the local inn was fine until an acquaintance overhead him say she was his wife. Now they have the choice of continuing in their deception and getting married for real or ruining reputations that are already fragile enough. Staying married will benefit Adrian in almost every way. But what about Elizabeth? Will it benefit her?

On top of trying to fool Adrian's two daughters (eighteen and sixteen) as well as his household that theirs is a love match, the two arrive back at Middlecrest Abbey just in time for there to be a murder. And much of the book is trying to figure out who the murderer is and how they connect to the correct carriage Adrian was supposed to hold up for his spying assignment. I had a few pieces of this puzzle figured out but not how each piece connected.